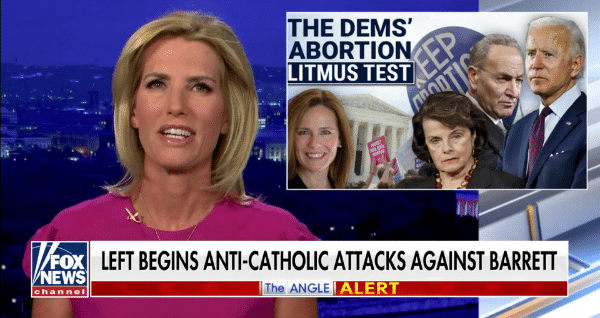 Supreme Court nominee Judge Amy Coney Barrett has become the latest target in the war on Christianity. Click here to watch the video.

The biased media, politicians and social media are distorting truth and reality with:

They perpetrate the lie that being a Christian makes you a bigot and therefore automatically disqualifies you from holding a government job.

Here are 11 disturbing things you should know about the Supreme Court and the historic importance of the nomination of Judge Amy Coney Barrett:

1. Judge Barrett’s nomination to the Supreme Court may be the most important in history.

With the death of Ruth Bader Ginsburg, the Court is now split 4-4 between strict constructionist justices and judicial activist justices.

The confirmation of Judge Barrett would shift the balance of the Court to a strict constructionist jurisprudence that will protect religious freedom, liberty, and economic opportunity for the next 20 or perhaps 30 years.

This would be a historic shift. Let me explain…

2. This is an Epic appointment, creating a major assault against Judge Barrett, the politicians, the social media.

It is all nonstop, one-sided attacks.

3. For some, Judge Barrett’s faith is the center of the focus against her confirmation.

The media and politicians are viciously lying about Judge Barnett’s faith … and made it into a war on Christianity.

Attacking Barrett’s faith isn’t new. It began back in 2017 when she was nominated for the federal court of appeals:

4. Why attacking a person’s faith is wrong in America when evaluating someone for a government office.

What the media and politicians are doing is constitutionally wrong.

“…all executive and judicial Officers, both of the United States and of the several States, shall be bound by Oath or Affirmation, to support this Constitution; but no religious Test shall ever be required as a Qualification to any Office or public Trust under the United States.”

Despite the clear prohibition of a religious test or requirement for holding any public office, if you happen to be a devout Christian or Catholic, a routine Senate Judiciary Committee hearing can quickly turn into a religious inquisition.

Imagine the outrage of the Left if Judge Barrett were an Orthodox Jew or a Hindi or a Buddhist – or especially if she were Muslim – and the Republicans on the Senate Judiciary Committee questioned her about her faith!

But because she’s a born-again Catholic, it’s fair game for the Democrats to probe into the details of her faith?

5. Who is Judge Amy Coney Barrett and what does she really believe?

Her one “negative” quality in the minds of the Democrat/socialists – she’s a devout Christian Catholic … and she supports a Charismatic movement called People of Praise.

It’s a group of Protestant and catholic charismatic, born again Christians who believe in the infallible Word of God, love, teaching, worship and service.

They share elements of the Calvary Chapel and Bethel movements.

They are solid Christians … not “cult”, not “unhinged”, not “mentally ill.”

6. The Democrat/socialists don’t like “People of Praise” – What it really is.

The New York Times and others like to focus on …

These principles and responsibilities come from Ephesians 5:15 through 6:4.

The secular politicians and media refer to the People of Praise organization as a “secretive religious cult.”

7. Why President Trump nominated Judge Barrett to the Supreme Court.

President Trump is committed to stopping judicial activism in federal courts – including the U.S. Supreme Court.

For over 50 years, the Supreme Court has legislated from the bench – creating new laws to replace the laws they ruled unconstitutional.

One of Donald Trump’s campaign promises was that if elected, he would appoint federal judges and Supreme Court justices who:

8. Why the secular pro-socialist Democrats are fighting hard to prevent and delay Judge Barrett’s confirmation.

The pro-socialist Democrats do not want to see the Supreme Court shift to a conservative-leaning, strict constructionist body.

They want to delay the confirmation of a new Supreme Court justice until after the general election in which they hope to defeat President Trump, retake the Senate and nominate a judicial activist judge to fill the Ruth Bader Ginsburg vacancy.

Constitutional lawyer and conservative talk-show host Mark Levin has said that the left-leaning, pro-socialist Democrats want to turn the Supreme Court into their own “Politburo” – an all-powerful, centralized legislative arm of the federal government that will support their political ideology from the bench:

Rather than talking about their disagreements with Judge Barrett’s judicial philosophy – or her views about interpreting and applying the Constitution – the media are using their standard tactic of:

Judge Barrett is a woman of integrity who will interpret the law according to the original intent and meaning of the Constitution.

She will act the way a judge should act. She will not create law from the bench.

The media and socialist politicians are trying to convince you that no Supreme Court nominee should be confirmed in an election year.

However, 29 Supreme Court vacancies have occurred during presidential election years throughout U.S. history, and the current president has nominated a replacement justice in every case.

Of those 29 Supreme Court vacancies, 19 of them occurred when the president’s political party controlled the Senate.1

So the biased media and the politicians are feeding you propaganda and lies.

Think about what the Supreme Court produces. It produces words that convey ideas.

The Court may convey good ideas or bad ideas. But whether good or bad, all ideas have consequences – life-changing and even nation-changing consequences.

The infamous Dred Scott decision in 1857 declared that blacks were not and could never be U.S. citizens. Bad idea … but extremely consequential.

The Plessy v. Ferguson decision in 1896 ruled that racial segregation laws for public facilities were constitutional as long as the segregated facilities were equal in quality. Another bad idea.

Both of these Supreme Court decisions were later overturned – but the ideas they conveyed are still having consequences in some locales even today… more than 100 years later.

Eventually the Supreme Court will reverse the Roe v. Wade decision as a flawed and improper usurpation of legislative authority. But the ideas that landmark decision conveyed will persist.

As the late President John F. Kennedy observed: “A man may die, nations may rise and fall, but an idea lives on.”

Eventually the Supreme Court will be asked by the LGBTQ community to declare sexual orientation and gender identity (SOGI) as protected minorities under federal anti-discrimination law.

Imagine the consequences for the First Amendment if the Supreme Court bows to the social pressure to add these lifestyle choices to the category of protected classes under the due process clause of the Fourteenth Amendment:

11. Neither politics nor the Supreme Court will save us from ourselves or from our moral imperfections.

We should add, “…nor from one wearing the robe of a Supreme Court justice.”

The ultimate responsibility for the morality of a culture rests with its citizens. We must not ask more nor expect more from our government leaders than we ask of ourselves.

As Christians, we are “the light of the world” (Matthew 5:14). We are called by God to influence our society for good.

Throughout history, Christians have taken the lead in opposing slavery, abortion, sex trafficking, racism, poverty, disease, hunger and a host of other threats to the common good.

If we love our Father in heaven, we must love our neighbor every day – whether it’s convenient or not – as the hated Samaritan demonstrated with the haughty Jew in Luke 10:25-37.

As tempting as it may be to retreat from our perilous post-Christian society into spiritual “safe zones,” we must not abandon either the Great Commission (Matthew 28:18-20) or the communities we are called to serve (Jeremiah 29:7).

1 Mclaughlin, Dan. “Why There Has Never Been a Supreme Court Justice Confirmed in the Fall of a Presidential Election Year.” National Review, September 21, 2020. https://www.nationalreview.com/corner/supreme-court-why-no-justice-has-beenconfirmed-in-the-fall-of-a-presidential-election-year/, Accessed October 12, 2020. 2 Ibid.

One Comment on “The War on Christianity: 11 Disturbing Facts Every Christian Should Know About the Bigoted Attacks on Judge Amy Coney Barrett’s Faith and the Supreme Court [Video]”