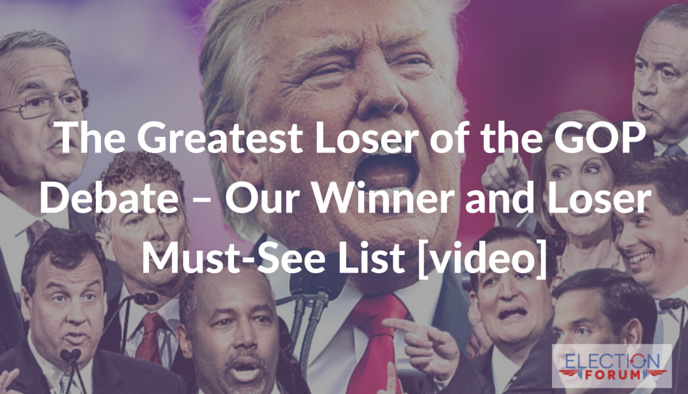 One Big Loser is agreed upon by everyone – the liberal CNBC moderators.

They were obnoxious, arrogant, and biased in their questions. They showed contempt, not objectivity.

They insulted the candidates.

Not shocking, as they are an arm of the liberal NBC/MSNBC. But surprising that they never tried to be objective and ask questions of substance.

The good news? The candidates stepped up to the plate and called out the moderators’ ridiculous and insulting biases. Watch Chris Christie here, Rubio answering an attack from the moderators and Jeb Bush here, and Rubio again slamming the liberal media here.

And Ted Cruz did an amazing job exposing their liberal attacks; see here for this classic expose on how the moderators slanted the questions.

It all started with Donald Trump’s ideas being called “comic-book” and went downhill from there.

Here are the winners and other losers:

This debate had 14 million viewers, which is ten million less than the first two debates. The World Series was playing at the same time and it wasn’t available for online streaming.

It also didn’t do as well on social media, with only 1.8 million tweets compared with the 3.9 million during the second debate.

And here are the videos referenced earlier:

Chris Christie calling out the moderators