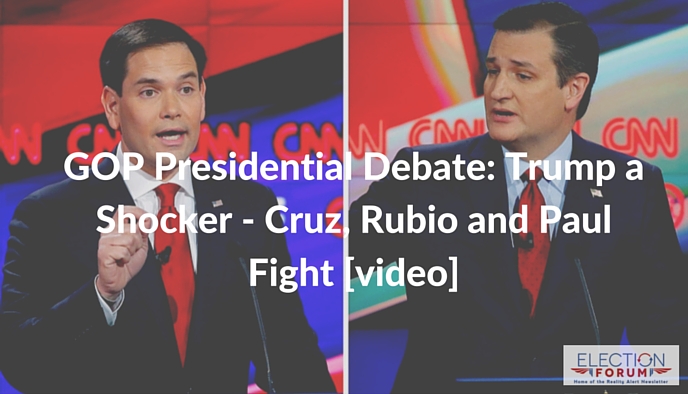 Here is how the candidates did, with our rating and brief analysis:

He came across with authority and passion.

Despite being attacked, he was articulate and clear.

He was the strongest advocate for freedom and constitutional protections.

It was his best debate, but he was not very good.

Always entertaining, his lack of understanding of foreign affairs and unconstitutional censorship of the internet were his downfall. Also advocated big spending – as Carly pointed out, like the progressive Democrats.

John Kasich: He did better than in other debates, but he was an ego maniac.

Carly Fiorina: Worst performance for her in any of the debates.

The questions by CNN on the debate were terrible.

The biggest dramas were Bush/Trump and Rubio/Cruz. Below are a few highlights of note.

The shocker of the night: Trump pledged not to run as an independent.

No significant issues asked about. Paul did mention giving voluntarily to his church.

Most Articulate on Freedom

Most Articulate on Economic Freedom

Here are some video highlights:

Rubio vs. Cruz on Surveillance

Rubio vs. Cruz on Immigration