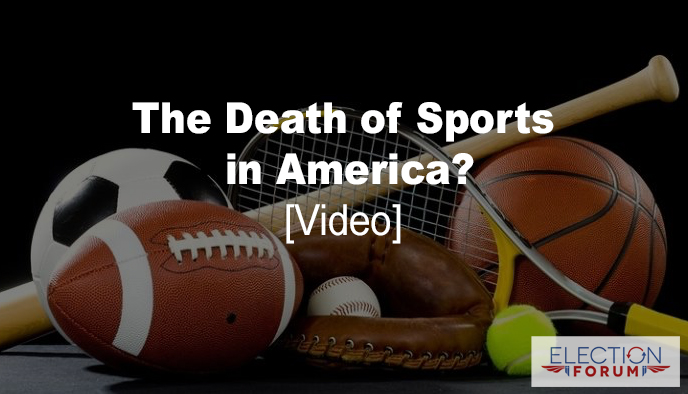 Sports have been politicized.

Watch the videos below from Tucker Carlson to see why Americans can “no longer bond” over football, and his discussion with both reporter Joe Concha, and with two former professional football players on the recent controversy over protests in the NFL.

Historically, sports are a part of culture that we can all enjoy together, right?

At a football game, for example, you might find the following people, together in the stand:

Sitting side by side, cheering on their favorite teams, standing when a great play is made. These groups, although divided in some ways over many important issues, can join together over a common interest and passion, and forget about their differences for a few hours.

That’s one of the most wonderful thing about sports.

But is that all coming to an end?

Now, the biggest highlight in sports is not the scores, but the political controversy generated by protests shown by NFL players.

These players forget that the very same flag they’re protesting is the same one under which they received their rights as Americans.

On Friday, President Trump pointed out that players disrespect the American flag when they kneel during the anthem, saying that those players should be fired.

Some people are outraged by Trump’s response, including CEO of the San Francisco 49ers, Jed York, who said his comments were “offensive.”

NFL commissioner Roger Goodell also responded to Trump by saying that the players have a right to kneel, saying that his comments were “divisive” and showed an “unfortunate lack of respect” for the NFL and its players.

What York and Goodell may not see is that it’s hypocritical to say Trump shouldn’t involve himself in this situation, and yet the players have the right to politically protest.

While President Trump could have been more polite in his delivery of his message, disrespecting the American flag is protest against the wrong entity. It also dishonors and disrespects the people who have laid down their lives to serve our country in the military.

If the NFL chooses to turn its back on the American flag, fans have the right to turn their backs on the NFL, or on the actions they find offensive.

Says one fan, “We used to love football Sunday but it has become a ‘political football’ and when enough people quit watching and these ridiculous salaries disappear, it will be a rude awakening to what most people deal with every day.”

What 70% of fans don’t see are these 2 narratives:

1. Patriotism vs. Protest
2. Sports vs. Politics

Players are protesting, mixing these narratives and causing politics to enter into the sports arena.

Personally, I refuse to go to a game where players disrupt media and sportsmanship on national TV.

This is not about free speech, or about being a Republican or a Democrat. It’s about respecting the fans and entertainment. It’s also about respecting America, and the people who have served our country to help make it what it is.

Speak out and protest…but not during a game.

Fortunately, there are those who are standing up for unity and patriotism.

Secretary of Housing and Urban Development and former presidential candidate Ben Carson shared his opinion this past Sunday, saying that NFL Sundays used to “represent a time of fun, games and unity.”

All of that has been compromised by the recent controversy, as attention has been turned to politics during the games.

Carson reminded fans “that even though we’re rooting for different sports teams, we are united as a country.” He added that there is a proper “time and place for everything”- even politics.

There are also those within the NFL who are actively showing respect and honor for the flag in the midst of controversy.

NFL player Alejandro Villanueva of the Pittsburgh Steelers walked out during a game and stood by himself during the national anthem, while the remainder of the team stayed inside the locker room.

Although his own coach Mike Tomlin encouraged him to stay inside with the rest of the team, Villaneuva refused to disrespect the flag and chose to say the national anthem.

Villaneuva has since been accused of apologizing for the action, but his only regret is not having the rest of his team with him.

He says that if his team knew he was going to take a stand and say the anthem, “the entire team would’ve been out there with me, even the ones that wanted to take a knee.”

Villaneuva is a committed follower of Christ, saying “everything I have I owe to God.” He put his country before his team, and showed incredible unity and respect in the process. His popularity has skyrocketed since.

Villeanueva’s actions show us a wonderful example of what it means to follow Christ in this kind of situation.

How are we, as Christians, meant to respond to this kind of situation?

What is the biblical basis for being Christlike in this kind of situation?

Here are 4 biblical principles that apply to the controversy in the NFL:

As Christians, we are “subject to the governing authorities” (Romans 13:1; 1 Peter 2:13-14; Titus 3:1). That means respecting authorities, even when we disagree.

We are also to pray “for kings and all who are in high positions” (1 Timothy 2:2). We are to pray for all those in political authority, even if we disagree with their policies.

It is crucial that we as Christians work for righteousness. Proverbs 21:3 says “To do righteousness and justice is more acceptable to the Lord than sacrifice.” Racism is repeatedly denounced in Scripture (Galatians 3:28; Romans 10:12; James 2:9), and we need to find ways to constructively work against it.

We should respect others, including veterans who have served our country. The Apostle Paul chose not to eat meat offered to idols if doing so would offend his brother (1 Corinthians 8). Protests during the national anthem are extremely offensive to many Americans. For the sake of unity, we can stand together to honor fellow Americans who have died serving the country.

Just as players like Kapernick and Villanueva have used their platforms and influence to deliver a message, we can also communicate a message.

One idea for the NFL is this: invite veterans who have served America to games, to stand on both sides of the field. Then everyone- players, fans, coaches- can stand and sing the anthem to honor their sacrifices.

It is my personal hope that we can return to a time when sports encouraged and represented unity and honor.