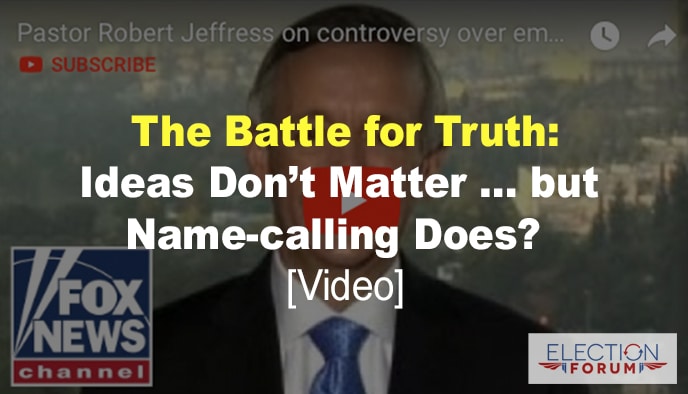 Robert Jeffress – pastor of First Baptist Church in Dallas – was chosen by President Trump to give the opening prayer at the recent opening ceremony for the U.S. Embassy in Jerusalem.

Mitt Romney criticized the choice – accusing Jeffress of being “a religious bigot.”

Robert Jeffress says “You can’t be saved by being a Jew,” and “Mormonism is a heresy… He’s said the same thing about Islam. Such a religious bigot should not be giving the prayer that opens United States Embassy in Jerusalem.

Jeffress responded to Romney’s accusation with a tweet of his own:

Historic Christianity has taught for 2,000 years that salvation is through faith in Christ alone. The fact that I, along with tens of millions of evangelical Christians around the world, continue to espouse that belief, is neither bigoted nor newsworthy.

Take a moment to compare these 2 statements…

Robert Jeffress shares ideas and reasons to support the evangelical Christian doctrine that salvation for all of mankind – for Jews, Mormons, atheists, Muslims, Hindus, agnostics, etc.—comes by grace alone, through faith alone and trust alone in the substitutionary death of Christ on the cross … and His subsequent bodily resurrection from the dead.

Mitt Romney on the other hand gives no ideas or arguments … he simply calls Jeffress a name – a religious bigot.

Does he mean he believes Jeffress is intolerant of people who disagree with his religious beliefs?

If so, he has a point … but he gives no reasons or arguments to support the idea that Jeffress is intolerant of other people.

If, on the other hand Romney – by calling him a religious bigot – means that Jeffress is intolerant of religious beliefs that contradict his own faith … Romney has no leg to stand on.

Romney himself believes this about his religion … whether he’s willing to admit or not.

So, Romney is just as much of a religious bigot as he accuses Jeffress of being.

What do you think? Write me at crag@electionforum.org.

8 Comments on “The Battle for Truth: Ideas Don’t Matter … but Name-calling Does? [Video]”