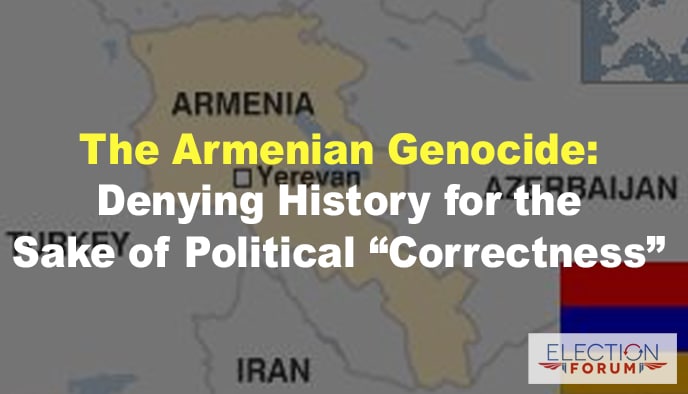 It was a massive genocide that many tried to cover up.

But on its anniversary, you need to know.

When I was last in Israel, I met an Armenian shop owner in Jerusalem playing contemporary Christian music. He told me his story. His family survived the massacre. Survivors fled worldwide. His family set up multiple stores and businesses in Jerusalem with other Armenians.

Today, most of his family have fled to the U.S. out of fear of Muslim terrorists in Jerusalem. They experienced persecution and discrimination and were afraid for their lives.

He also showed me a magnificent church hidden in Jerusalem. It was a fortress with one-year supply of food and water, and its own school. It was built by Armenians, fearful of another genocide.

Today, few remember the Armenian genocide. And many falsely claim it’s a hoax. Let’s take a look at the facts.

It is a country located in the South Caucasus region of Eurasia – east of Turkey – between the Black Sea and the Caspian Sea.

It is bordered on the north by Georgia … on the east by Azerbaijan … and on the west by Turkey.

Mt. Ararat – the final resting place of Noah’s Ark – is located in Armenia.

Who are the Armenians?

They are believed to be descendants of Noah’s son Japheth – and related to the ancient Hittites and Hurrians who inhabited the region of Armenia in the 2nd millennium B.C.

Armenia was the first nation in the world to officially adopt Christianity as its state religion – with the conversion of King Tiridates III in about 301 A.D.

What was the Armenian Genocide?

It was an Islamic Jihad against Armenian Christians by Turkish Muslims – encouraged and sponsored by the Muslim leaders of the Turkish government.

By the time the slaughter ended, about 1.5 million had been brutally murdered.

Why did it happen?

In 1908 – when the last Turkish sultan was deposed – the government was taken over by 3 reformers who called themselves the “Young Turks.”

They wanted to “Turkify” the Ottoman Empire…

The Armenian Christians were accused of being disloyal to the empire … and of harboring sympathies for Russia.

When and how did the Armenian Genocide occur?

Second, they recruited all of the young Armenian men into the military…

Next they made them “non-combatant” soldiers and took away their weapons.

Then they marched them into the forests and deserts where they were ambushed and massacred.

With the young men gone, Armenian cities and villages were defenseless…

Entire communities were marched into the deserts where hundreds of thousands of women and children were killed or starved to death.

Many were thrown off cliffs or burned alive … many others were crucified.

The corpses of dead Christians littered the countryside…

The President of Turkey – Recep Erdogan – is from a long line of Muslim leaders who have no sympathy for non-Muslim tragedies on any scale.

The Armenian Genocide – if nothing else – shows us that ISIS is far from original in its efforts to slaughter Christians in the Middle East.

The World in Denial

Turkey and the majority of the Muslims world deny history and say—like the Holocaust of Jews in the 1940’s—it never happened.

And U.S. politicians don’t do what is right out of fear!

President George W. Bush failed to officially recognize it during his presidency.

During the 2008 presidential campaign, Barack Obama criticized Bush for not recognizing it … and promised to do so himself after becoming president.

I hope President Trump will recognize the genocide this year. Let’s see.

The movie The Promise tells the story of the final days of the Ottoman Empire and the beginning of the Armenian Genocide. Watch the official 2017 trailer here:

Although the movie is no longer playing in theaters, you can purchase the DVD on Amazon here.

One Comment on “The Armenian Genocide: Denying History for the Sake of Political “Correctness””