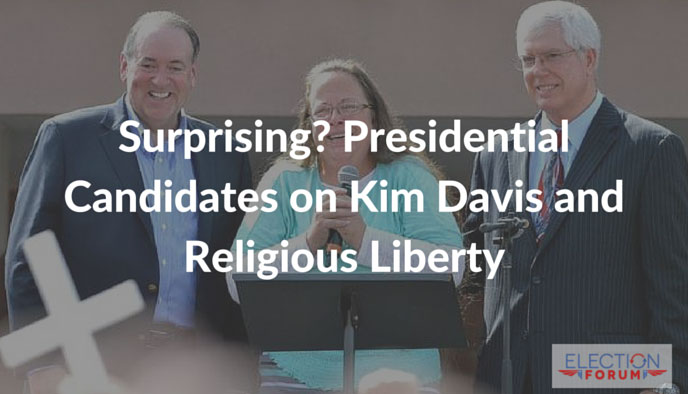 The Kim Davis case – where a Christian woman was thrown into jail because of her beliefs on marriage – has created a very important division in an otherwise somewhat unified GOP field.

The candidates who have criticized or ignored Kim Davis will lose the support of those who are gravely concerned about religious liberty in our country.

Religious liberty is the civil rights issue of our generation. It’s extremely important to elect a president who understands that and stands for religious freedom.

Here are the candidates divided into the three camps.

Camp 1: Candidates who criticize Davis for refusing to issue licenses or resign

Camp 3: Candidates who support Kim Davis and condemn Judge Bunning for jailing her

Here are the details:

Wishes that Kim Davis was not jailed for refusing to issue gay marriage licenses, but Supreme Court has ruled and that ruling is the “law of the land.”

“You have to go with it. The decision’s been made, and that is the law of the land.”

Kim Davis “must comply with the law or resign. The rule of law is the rule of law. That’s what we are. We are a rule of law nation, and I appreciate her conviction. I support traditional marriage, but she’s accepted a job where she has to apply the law to everyone. And that’s her choice.”

“I respect the fact that this lady doesn’t agree, but she’s also a government employee. She’s not running a church. I wouldn’t force this on a church, but in terms of her responsibility I think she has to comply.”

“I don’t like the fact that she’s sitting in jail – that’s just absurd as well. But I think she should follow the law.”

“What I would do with this woman is to move her to another job where this is not an objection for her. Because you have to follow the law.”

Davis is “sworn to uphold the law,” but “there ought to be common ground, there ought to be a big enough space for her to act on her conscience, and for now that the law is the law of the land, for a gay couple to be married in whatever jurisdiction that is.”

“We shouldn’t be pushing people out of the public square if they have deeply held views, nor should we discriminate against people, particularly after this court ruling as it relates to sexual orientation, so I think there ought to be a way to figure this out.”

“People who stand up and are making a stand to say that they believe in something is an important part of the American way.”

“I think it’s absurd to put someone in jail for exercising their religious liberty. I think it’s a real mistake, and even those on the other side of the issue, I think it sets their movement back.”

“Today, for the first time ever, the government arrested a Christian woman for living according to her faith. This is wrong. This is not America. I stand with Kim Davis. Unequivocally. I stand with every American that the Obama Administration is trying to force to choose between honoring his or her faith or complying with a lawless court opinion. Those who are persecuting Kim Davis believe that Christians should not serve in public office. That is the consequence of their position. Or, if Christians do serve in public office, they must disregard their religious faith – or be sent to jail.”

Ted Cruz visited Mrs. Davis in jail and attended the rally for her release.

Huckabee coordinated a rally outside the jail detaining Kim Davis to demand her release. She was released right before the rally was scheduled to take place.

“The Supreme Court cannot and did not make a law. They only made a ruling on a law. Congress makes the laws. Because Congress has made no law allowing for same-sex marriage, Kim does not have the Constitutional authority to issue a marriage license to homosexual couples.”

“I don’t think anyone should have to choose between following their conscience and religious beliefs and giving up their job and facing financial sanctions.”

“I have great respect for Ms. Davis and her courage to stand up for her faith. In America we should not have to choose between keeping our job and practicing our faith.”

“While the clerk’s office has a governmental duty to carry out the law, there should be a way to protect the religious freedom and conscience rights of individuals working in the office.”

One Comment on “Surprising? Presidential Candidates on Kim Davis and Religious Liberty”