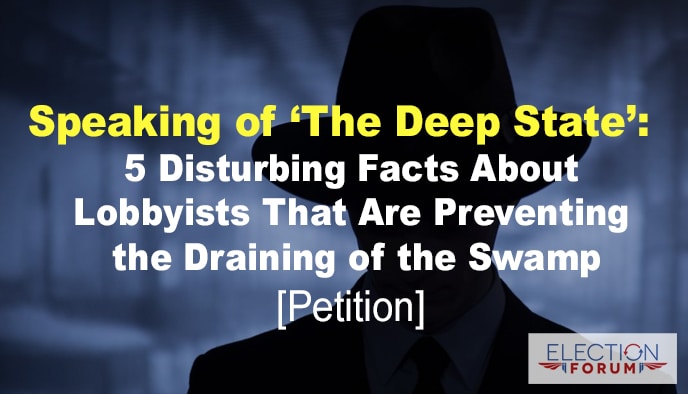 One of the unseen but powerful manipulations stopping the draining of the government swamp is the manipulation of politicians by lobbyists.

The Deep State is a decentralized network of:

Here are 5 little-known facts you need to know about the Deep State and the dangers special-interest lobbyists pose for our elections and for improving government policies:

Lobbyists use the following forms of leverage to maintain the status quo:

When I ran for Congress, I was unable to receive any funds from lobbyists to help with my political campaign because of my conservative views … but my opponent received $2.5 million.

Politicians need money … lots of it … to pay for the campaign they just completed when they first got elected … and to pay for their campaigns for reelection.

Most politicians will change their position on an issue in a heartbeat if it means receiving large campaign contributions from the entities represented by lobbyists.

But there has been at least one political candidate that the lobbyists could not manipulate with their money – Donald Trump.

Normally, presidential candidates need the financial support of lobbyists … who provide it contingent on the candidates leaning politically toward the interests of the lobbyists…

But because of Trump’s enormous success in business, he was able to run unencumbered by outside interests.

Trump won on his own:

Now the Deep State is fighting back … infuriated by Trump’s victory.

Lobbyists have been instrumental in:

President Trump doesn’t have a coalition of lobbyists defending him … and the mainstream media is adamantly opposed to everything he does and everything he stands for.

But that doesn’t address they lobbying that’s currently occurring.

In many ways the president’s hands are tied … he can’t outlaw lobbying … nor can he fire lobbyists or government employees hired by the agencies in which they work.

But here’s how you can help:

4 Comments on “Speaking of ‘The Deep State’: 5 Disturbing Facts About Lobbyists That Are Preventing the Draining of the Swamp [Petition]”