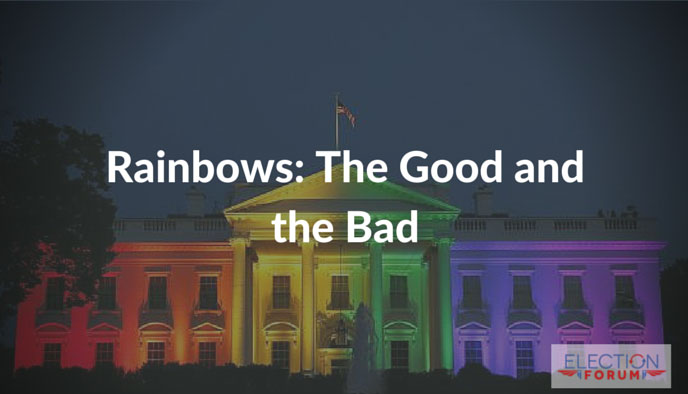 After the Supreme Court ruled that same-sex marriage is a fundamental right, rainbows and #LoveWins hashtags were splashed across the media…

And a White House lit up in rainbow lights.

The President of the United States – who is supposed to be a national leader, unifying and leading a pluralistic people – has made the White House a symbol of gay pride.

According to Obama, gay pride celebrations represent the nation.

But there’s one small problem…

The American people are deeply divided over this issue. The Supreme Court ruling overturned 15 still-standing state constitutions and, additionally, upheld judicial decisions overturning the legislation or constitutional amendments of 24 other states.

Only 11 states had redefined marriage by popular vote or through the legislature.

The voice of the people has spoken – to uphold traditional marriage – in almost 40 states.

What’s more, the ruling itself was narrowly achieved – only a 5-4 decision.

The White House all decked out in rainbow lights is not representative of the American people. It is gay propaganda, and the worst form of partisanship and offense to those who disagree.

Ironically, the rainbow is actually a symbol of God’s promise to mankind – His promise to never wipe out the human race again, as He did with the flood.

And now the rainbow has been usurped: it is flaunted as a symbol of gay pride, of pride in sin. God gave us a symbol of mercy, and Obama and the gay movement have turned it into a symbol of defiance.

America’s nationwide celebration of gay pride is the only story that the Obama Administration and the media will tell the world.

But there’s another story.

While the White House was lit up in rainbow colors, the Supreme Court was lit up as well – but with the candles of hundreds gathered to pray.

At the Supreme Court, lights representing the other half of the nation were seen – and their voices of prayer were heard.

They prayed for mercy… for protection… for forgiveness.

But we have a higher Judge.

This is not the end of the struggle for marriage. Just as the pro-life movement exploded after Roe v. Wade, the pro-marriage movement will not go away – it will grow.

We must continue to speak the truth about marriage and fight to protect it.

And we have hope. Every time we see a rainbow, we will remember God’s promise of mercy… His mercy towards us despite our defiance.