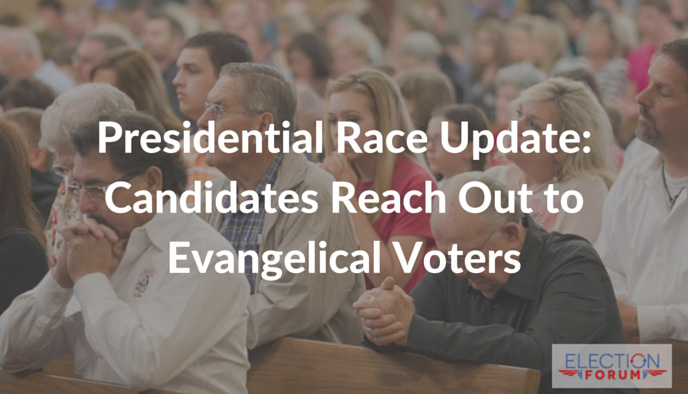 Here are some highlights from the forum:

Carly Fiorina said that people of faith are better leaders. She said faith gives us “humility because we know each of us is made in the image of God and gifted by God. Faith gives us empathy. We know that every one of us can fall, and each one of us can be redeemed. And humility and empathy are vital in a leader if a leader is to serve and unlock potential in others. And finally, faith gives us optimism – the belief that things can be better and people will rise to the occasion.”

He also called on evangelicals to be engaged and to lead in the public square: “Census data show that there are about 90 million Evangelicals in America. IN the 2012 election, 54 million Evangelicals didn’t vote. If believers are staying home, if we are allowing our leaders to be elected by non-believers, is it any wonder we have a federal government that is assaulting life and marriage and religious liberty?”

Rick Santorum, who calls himself an evangelical Catholic, explained his opposition to Obamacare: “In countries that use socialized medicine, survival rates of children with disabilities is infinitely smaller. They don’t dedicate resources unless there is some useful purpose to the life that they’re taking care of…. So when I saw Obamacare and socialized healthcare, I jumped in.”

Mike Huckabee: “I refuse to walk through the charred remains of what was once a great country called America and say to [my grandchildren], here it is, this is what we’ve left you: $20 trillion of debt; Islamic jihadism that is determined to kill you all; a world whose economy is collapsing and no more where people can go to work and expect that if they work hard they’ll be rewarded for it because they’ll probably be punished for working hard; and a government that has been completely separated from the constitutional authority it’s supposed to live under.”

He also said we must repent: “How can we ask God to bless a nation that for 42 years had ended the lives of 60 million unborn children? This is uncivilized savagery for which we must repent. But we must do more than be sorry about it, we must change it…. I would invoke the 5th and 14th Amendments which already say you cannot deprive a person of their life and liberty without due process and equal protection. So there’s only one question to be raised: Is that unborn child a person? And if it is a person, it already has its constitutional rights to life and liberty.”

Ben Carson shared his testimony: He gave his life to Christ after almost stabbing teenager he was fighting with. His action horrified him – and he cried out to God to temper his anger. He read the Bible for 3 hours, and he said right then his life was changed forever.

Jeb Bush explained why he converted from being an Episcopalian to being a Catholic: “The thing I admire most about the Catholic faith is the basic foundation element is that life is precious, it is a gift from God. It is not ours to take. Everybody has value; everybody has an asset. Whether you’re a developmentally disabled child, a frail elder, or an unborn baby, life has value and should be respected from beginning to end.”

Jeb Bush also said that our policies need to be evaluated by whether they strengthen families. And he said that the next President is going to have to fight for religious freedom “with his heart and soul,” that we need to make religious freedom front and center – both in the U.S. and around the world.

All six candidates who spoke are serious contenders for the evangelical vote. Watch their speeches here: