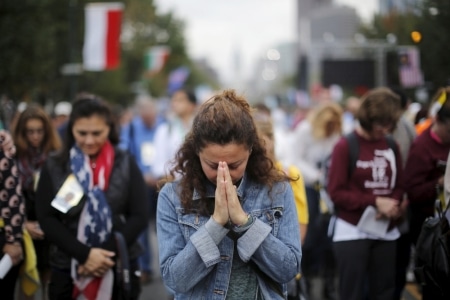 Shelly and I marched on Sunday.

It was one of hundreds of marches across America and led by Pastors, Church leaders and Christians.

It was not political.

It was not violent.

It was not anger or rage.

Shelly and I marched in Nashville, Tennessee with over 500 gathered around the courthouse.  It was the seventh prayer/march event.

Along with those who participated in the Unite march, Shelly and I wore a t-shirt.

The image on the t-shirt was powerful.

It had two hands, one black and one white clasped together in prayer. The wording was simple.  Unite.

As Christians, we know the root of the race divide in the cultural upheaval today is sin.

The solution is Jesus.

Different races.  Different age groups.  But all united for the church to take the lead in healing our land.

There was no bitterness or hatred.

There was love and focus on Jesus.

There were prayers for racial healing.  For leaders in authority.  For Judges.  For Police.

There were prayers to break fear.  To find peace in Christ.

Pastor Steve Berger of Grace Chapel and Pastor James Lowe of Bethel, along with about 20 other pastors stood united that the only hope was in prayer, repentance, and revival.

It has happened in Washington, D.C.  In Oklahoma.  In New Jersey.  In most states.

“For our struggle is not against flesh and blood, but against the rulers, against the authorities, against the powers of this dark world and against the spiritual forces of evil in the heavenly realms. 13 Therefore put on the full armor of God, so that when the day of evil comes, you may be able to stand your ground, and after you have done everything, to stand”.

What are your thoughts?  Email me at Craig@ElectionForum.com.