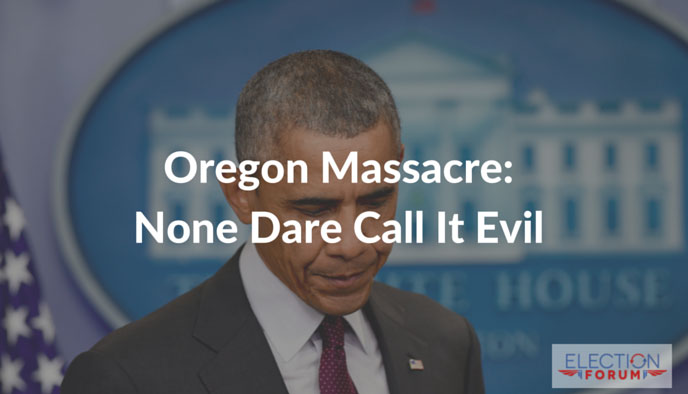 Another school shooting… another tragedy….

The persecution of Christians in America surfaces again.

The Oregon shooter killed 13 people. According to eyewitnesses, before he shot some of them, he asked them if they were Christians – shooting them in the head if they said yes, and in the legs if they said no or didn’t answer.

This kind of hostility towards Christians is shockingly evil.

Christians are increasingly being painted as hateful bigots who deserve to be discriminated against, ostracized, or imprisoned.

Such a widespread, extreme, and base hostility to Christianity has never before existed in America.

Now, imagine if the shooter had said he was a Christian instead, and asked his victims if they were gay before shooting them.

The media and politicians would be outraged. They would attack “homophobia” with full force, even at the expense of free speech and religious liberty. Christian beliefs in marriage would be criminalized. Christians would be monitored and maybe even be sent to “reeducation” camps.

Even if the victims were Muslims, the media would condemn the evil of “Islamophobia.”

Here, the media was silent. On the major networks. On cable TV – silence. Gun control was the issue, not the targeting of Christians.

The politicians – including Obama – were also silent, focusing instead on gun control.

Or just remember the evil in Charleston, where the shooter was found to be a white supremacist. The media and politicians saw the evil of racism and the issue of race relations in America was again scrutinized. Those victims were also targeted as Christians – but the faith component was ignored.

Because the victims were Christians, the mainstream media doesn’t say a word about the shooter’s anti-Christian motivations.

Outrage is reserved for the tool he used instead of his hatred and evil actions. Prescription drugs. Mental illness. Hatred. All could be a trigger – but it was evil.

And instead of concern about the demonization of Christianity in America and a culture producing evil, the left pushes and promotes lies in order to accomplish more gun control.

In response to the tragedy, President Obama said: “We know that the states with the most gun laws tend to have the fewest gun deaths. So the notion that gun laws don’t work, or just will make it harder for law-abiding citizens and criminals will still get their guns is not born out by the evidence.”

That statement is a bold-faced lie.

Here are the top 15 states with the strictest gun laws, ranked in order:

Now, here are the facts about gun violence in these states:

Roseburg is in Oregon, which has stricter gun laws than 36 other states.

The Columbine and Aurora shootings both occurred in Colorado, which has stricter gun laws than 37 other states – almost 3/4 of the nation.

California is the #1 most restrictive gun law state – and also has 4 of the top 30 “murder capitals.”

Connecticut, the #5 state with most restrictive gun laws, was where the Newton tragedy occurred.

Baltimore, #11 on the list of the top 30 murder capitals, is in Maryland – the 7th state with most restrictive gun laws.

The facts not only don’t support what President Obama said – they contradict it.

President Obama is not telling the truth to the American people in order to advance unconstitutional gun control policies that put people in more harm.

This targeting of Christians is shocking in America.

But it is not new to the rest of the world.

In China, the threat of persecution forces believers to meet secretly. In Pakistan, Iraq and Syria, persecution is brutal: Christians are jailed, raped, murdered, and trafficked. And this same evil and violent persecution of Christians exists in Nigeria…Libya…Yemen… Egypt… and many other countries.

If any good can come out of this tragic shooting in Oregon, maybe it will remind American Christians of the kind of persecution the church endures in other parts of the world.

We need to pray for the persecuted church abroad.

We need to grieve for them, suffer with them, bear their burdens, support and care for them.

And we need to call evil evil. We cannot be silent, but we must speak the truth in love. We must pray for America, our President and our leaders.

One Comment on “Oregon Massacre: None Dare Call It Evil”