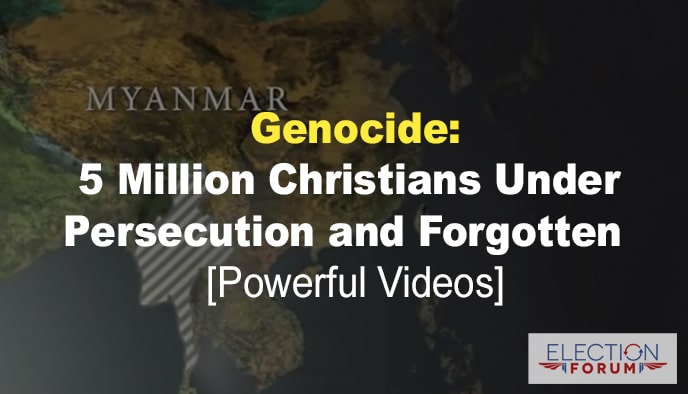 The media ignores it.

Too many Christians who know about it are silent.

Because some of them want independence from the brutal military-led regime in Myanmar … and because 15-20% of them are Christians.

That’s right … the Myanmar army wants to wipe them out just because they are followers of Jesus Christ and not followers of Buddha.

In the past 10 years, one out of every 4 refugees coming to the U.S. has come from Myanmar – formerly Burma.

More than 70,000 Karen people have come to escape religious persecution.

Myanmar is a predominantly Buddhist country of 53 million people in Southeast Asia … bordered by India and Bangladesh on the west … Laos and Thailand on the east … China on the north … and the Bay of Bengal and the Andaman Sea on the South.

Interestingly, the Karen people historically resisted all attempts by the Burmese to turn them into Buddhists.

And they believed the author of this book was Y’wa – the Supreme God!

To strengthen their tribal beliefs in the unknown Y’wa, Karen prophets wrote and taught hymns to the people … hymns containing amazingly accurate character attributes of the God of the Bible – such as:

If these prophecies and hymns of the Karen elders were the result of ancient Jewish influence, there would be mention of Old Testament patriarchs such as Abraham and Moses … but there is no mention of such prophets … or of the Ten Commandments.

Similarly, if the Karen traditions could be traced back to Christian influence from the 8th century … or to later Catholic missionary contacts from the 16th to the 18th centuries … there would be mention of an incarnation … or of a Redeemer dying for sins and rising from the dead.

Those events are all missing in Karen folklore…

His name was Adoniram Judson…

The complete story of the Karen people … and of Adoniram Judson’s work on their behalf … is told in chapter 2 of the book Eternity in their Hearts, by Don Richardson.

I highly recommend this book…

The book title comes from Ecclesiastes 3:11…

“He has made everything beautiful in its time. He has also set eternity in the hearts of men; yet they cannot fathom what God has done from beginning to end.”

The U.S. government and the Trump administration have an opportunity to take the lead on the important human rights issue regarding the Karen people … and make it clear to the world that we will not tolerate genocide.

And as Christians, we have an opportunity to pray: