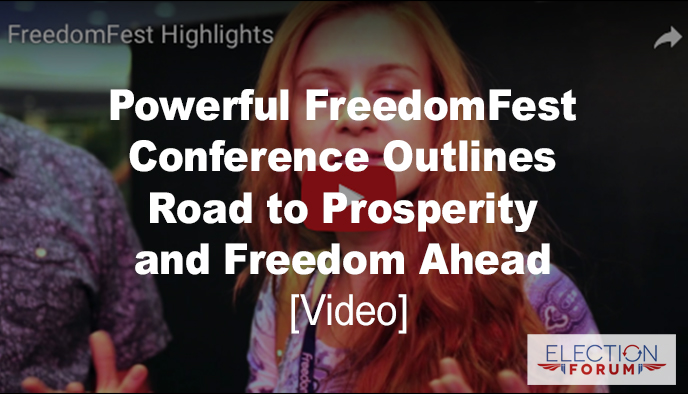 I spoke at the FreedomFest Conference again this year.

This is the 10th time I’ve been a speaker. It was great seeing so many subscribers attending.

My wife, Shelly, and I talked with many of the major movers and shakers who help transform our culture and society.

My wife and I had some great conversations with political commentator Dinesh D’Souza, investment experts Keith Fitz-Gerald and Steve Forbes, Greg Gutfeld, Michael Medved, James O’Keefe from Project Veritas, and others.

My wife had a great opportunity to pray with many of them.

I told Steve Forbes that the best speech of the conference was his talk on Obamacare.

He outlined details of a specific road map to not only repealing Obamacare but replacing it with a far better system than we had before.

I encourage you to order his DVD, you will be happy you did. You can order it and other FreedomFest speeches by clicking here.

One of the key themes throughout the conference was what was happening in Washington, D.C.

There was a consensus that Jeff Sessions was not the right fit for Attorney General, especially considering his pushing for “asset forfeiture.”

Conservatives, libertarians and many liberals alike are united in wanting to stop the unconstitutional practice of seizing assets.

The person whose property is seized must prove he is not a criminal. That’s right, he must prove it at his expense.

Actually, the government wants asset forfeiture because the proceeds from this theft goes to the government, increasing the incentive of providing slush funds.

Also, the conference took exception at his renewed attempt to be tough on the prosecution of drug offenders and bringing back the failed “war on drugs.”

Sessions, without consulting the White House, unilaterally directed U.S. attorneys across the country to return to drug-offender prosecutions.

While without a doubt Sessions has been effective in many areas, including stopping gang crime, the FreedomFest consensus was he was the worst of Trump’s appointments because of his own agenda that ran contrary to Trumps.

Another interesting discussion came from Sen. Mike Lee of Utah. He told a packed audience, “Liberty runs through our DNA and it’s something we need to protect every day.”

He called for consistency and for conservatives and Republicans to act on principle.

A major theme evolving from FreedomFest is if you don’t understand free-market economics, you’re going to compromise on critical issues that may sound good but have terrible unintended consequences.

Another major benefit of FreedomFest was seeing how companies are raising capital privately, thanks to the new Jobs Act.

Some are using crowdfunding to fast tracking becoming public, some are just raising money to expand.

If you are interested in that, I will be doing a free webinar at 11 a.m. (PST) Aug. 17. To register for the webinar, click here.

You get a sense of where America is at, solutions you won’t hear in the media, and to meet and talk to some of the brightest minds in the investment business, political and economic fields.

Want to see what you missed? Here’s a 5-minute highlights video.