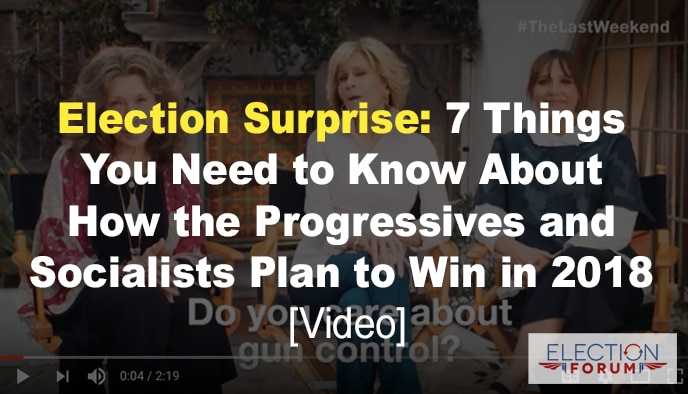 If the progressives and socialists retake the House and Senate in this November’s midterm elections, it will be a major setback for:

But they don’t have to win … they can be defeated…

A major requirement in successfully combatting any adversary is to know the characteristics of the adversary and the tactics it uses. Here are 7 tactics the progressives are using to give their candidates the best chance of winning in November:

First, they are organized and purposeful in registering new voters.

Across America, progressive groups are creating voter registration drives targeting people who have signed petitions … and people who have expressed anger about any Trump administration policy.

Second, they devise a campaign to

For example … billionaire Tom Steyer and his organization NextGen America/Need to Impeach has generated 5.5 million signatures of people who want to see President Trump impeached.

They’ve identified those not registered to  vote … plus 697,780 “infrequent voters” in the 63 most competitive House districts.

They’re using the formula I teach in my Marketing Bootcamp…

The progressive organizations have been purposefully collecting data:

And they make sure everyone is registered to vote … and does vote on election day.

This spells Victory … and creates what they hope will be a “blue wave.”

The progressives are doing these things NOW … not the conservatives.

The progressives understand that about 70% of all voting is done by mail.

This means campaigning has already begun…

The progressives are out in full force with organized, purposeful marketing for the vote by mail.

If a candidate hasn’t already begun implementing this tactic, that candidate isn’t going to win in November.

The progressives are dividing each targeted race in two ways:

The goal is to first target the friendly to make sure they have a high voter turnout.

Second, target the persuadable or swing voters to join their side.

Third, target the opposition to destroy them by suppressing their votes.

Here, the progressives break down the three voter propensity categories and use whatever the #1 issue is for the voter – abortion, jobs, education, healthcare, etc. – and micro-target the audience by issue.

The progressive organization Swing Left is combining with 22 other ideological organizations in a massive effort to get out the vote.

The effort is being called a campaign “unprecedented in its scope and scale.”

Some of the organizations coming together for this campaign are:

It’s a massive and historic effort to get voters to actually vote.

This effort – if successful – could bring millions more to the polls than normal for a midterm election … and could help the progressives regain control of the House and Senate … and our nation.

“The Last Weekend” is the name of the 4-day period from the Saturday before the election to the election itself.

Voters are deciding during these 4 days who they will vote for … and if they will actually vote.

This 4-day period could change the course of the election…

Progressive organizations are recruiting both veteran activists and newcomers to influence key federal, state and local races in which the vote could swing either way.

This army of volunteers has already committed more than a million hours for “The Last Weekend.”

They will be making millions of phone calls … canvassing door-to-door … and hosting events to influence people to vote for Democratic candidates.

One powerful way that “The Last Weekend” is growing its army of volunteers is by making it easy to sign up:

“The Last Weekend” is being promoted in a video with Jane Fonda, Rashida Jones and Lily Tomlin calling on voters to take action to promote progressive values.

Organizations like Swing Left and Organizing for Action use brilliant marketing techniques and tactics to promote their values and political agenda.

If they are successful in the midterm elections, their efforts could result in a dangerous shift to the left in federal policies and legislation.