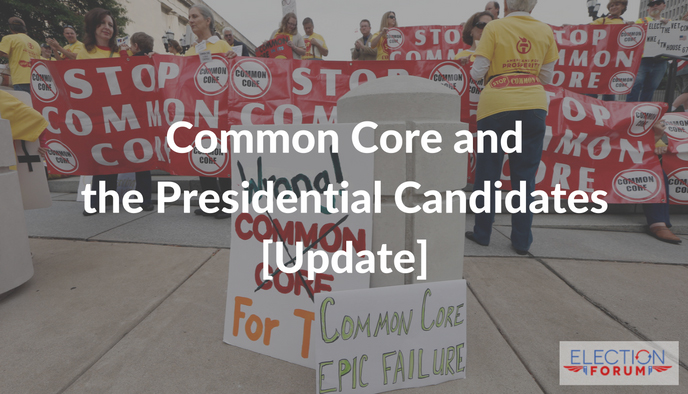 Finding out where the candidates stand on Common Core  is tricky.

Many are accused of flip-flopping on this issue for political gain – that their opposition is not genuine.

It’s not enough to take them for their word. We have to look at what they’ve said and supported in the past, and we also must look at their actions concerning Common Core.

We try to give as much relevant information as possible so that you can determine how trustworthy each candidate’s current statements are.

“[Common Core] was about coming up with a core of learning that we might expect students to achieve across our country, no matter what kind of school district they were in, no matter how poor their family was. That there wouldn’t be two tiers of education.

“Iowa has had a testing system based on a core curriculum for a  really long time. And you see the value of it. You understand why that helps you organize your whole education system. A lot of states, unfortunately, haven’t had that. So [they] don’t understand the value of a core, in this sense a common core. Of course, [then] you can figure out the best way in your community to try to reach.”

She also called education “the most important non-family enterprise.”

Hillary has been dancing around the issue and has not said much. A couple of explanations are: (1) her deep ties with teacher’s unions, which are now frustrated with Common Core and (2) internal division over Common Core within the Democratic Party.

However, she was centrally involved with the Goals 2000 project – a strategy for nationalizing American education using federal grants.

“The last thing we need is another Bush. He’s totally in favor of Common Core – that’s a disaster – it’s bad. It should be local and all of that.”

“I am totally against Common Core.”

Johnson has clearly stated his opposition the federal government’s involvement in education, including Common Core.

As Governor of New Mexico, he signed off on a comprehensive voucher program.

OnTheIssues: What about Common Core and national education standards and testing?

Stein: In general, high stakes testing is more than counterproductive–it is destructive. It is used as a political tool against teachers–targeting low-income and people of color. Our educational system should target lifetime learning–with full and equitable funding; and eliminating disparities by race. Testing for diagnostic purposes as part of standards [is ok, but we should have] curriculum written by teachers–not by corporate contractors.

OnTheIssues: So what about a thumbs-up or thumbs-down on Common Core, since it addresses some of those issues and not others?

Stein: It’s not separable from the issues above so I’d say thumbs down. All schools and all students should have the option to opt out. And that’s not enough–because so much of school curricula have been destroyed–we need to teach multi-dimensionally and make schools relevant, using the arts, engaging the community, and more.

What are your thoughts? Email me at craig@electionforum.org.