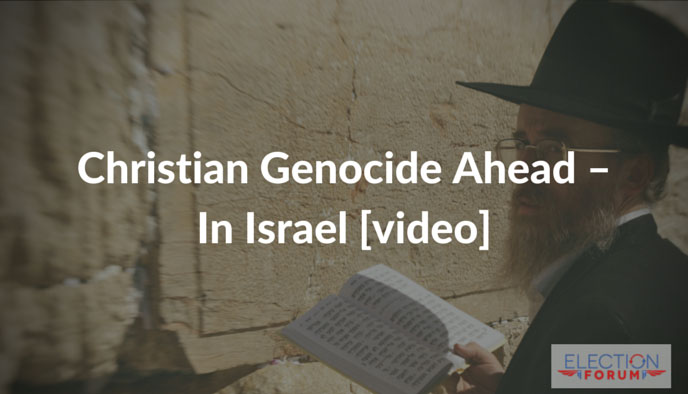 In Israel, there is a small but growing group of Christians.

And if you’ve been to Israel, you know the country is filled with Christian tourists.

It’s an awesome experience. I hope all of our readers will go… but there is now a new possible danger.

Jihadists identifying themselves with ISIS have threatened to “cleanse” Israel – by murdering all Christians and non-Muslims if they do not first leave.

Persecution has already been increasing in Israel, with a church being burned in early June and anti-Christian graffiti reading “May the false gods be eliminated.”

And they’ve issued a chilling threat… stating that they know where the Christians and “collaborators” are.

They are calling for a ”cleansing.”

“ISIS soldiers will work to kill these people so this country is clean of them and… will clean this country and the Muslim Quarter from these Christians during this holy Ramadan.”

Going back in history, they said:

“Because the Christians violated the Pact of Omar [made when Muslims conquered Jerusalem], we will do this. So we tell our Christians and the nonbelievers: Go away now or you will be killed when the Id [al Fitr festival ending Ramadan] is near. And you will be slaughtered like the sheep. One month is enough for them to go away.”

Christians in Israel have been issued death threats.

Please pray for the protection of our brothers and sisters in Israel.

Incidentally, despite this news, Shelly and I hope to visit Israel again in the next 12 months.