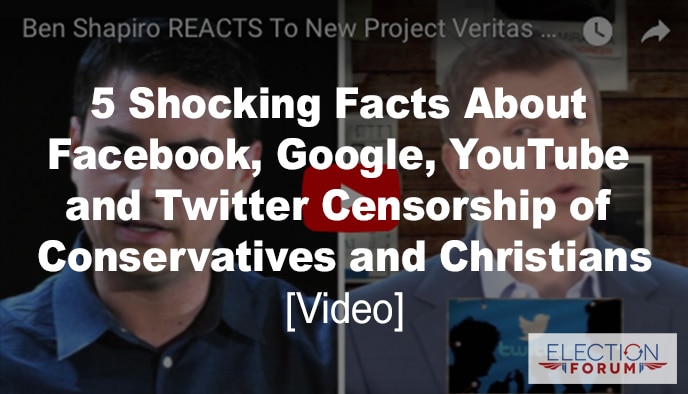 Freedom of speech is under attack in social media.

If you express any view that’s considered anti-abortion, pro-marriage, or in some other way politically incorrect, your post could be removed … your entire Facebook page could be removed … and you could have your account closed permanently.

Take for example the Christian ministry “Warriors for Christ,” whose Facebook page was removed recently.

The reason? It “violated community standards on bullying and hate speech.”

The focus of the page was to promote counseling services … only 3% of their 3,000 posts referred to LGBT issues.

Yet any term referring to homosexuality and counseling, used in any context whatsoever, causes a Facebook post to get flagged and banned.

“Warriors for Christ” was reinstated after an online petition called for Facebook to reverse its decision.

The page was then permanently removed a week later without explanation … and Pastor Rich Penkoski, owner of the page, was told the decision could not be appealed.

Facebook routinely manipulates the running sidebar of subjects that are said to be “trending” on the site … highlighting liberal topics and news sources while downplaying conservative-sourced news.

During the 2016 presidential campaign, more than a few Facebook employees wanted a discussion with founder Mark Zuckerberg about the company’s “responsibility” to stop Donald Trump.

When searching for media outlets, Google gives users details on the sidebar only on Christian, libertarian and conservative sites … including a section titled “Reviewed Claims.”

And guess who Google uses to review the “claims” of Christian, libertarian and conservative organizations – liberal media “fact-checking” sites like FactCheck.org, Politifact, Snopes, and Climate Feedback.

For example, PragerU videos on topics such as the history of the Korean War, the founding of Israel, the religion of Islam, and free speech on college campuses have been censored.

PragerU has filed a lawsuit against YouTube, claiming ideological discrimination.

“Negative” tweets can be hidden or banned so no one sees them … but the person posting the tweets doesn’t know that they’ve been banned.

Project Veritas recently released a video expose in which former Twitter engineers explained the technique of shadow banning and how it’s done.

Watch this 8-minute video of conservative commentator Ben Shapiro reacting to both the Twitter and the Google censorships: