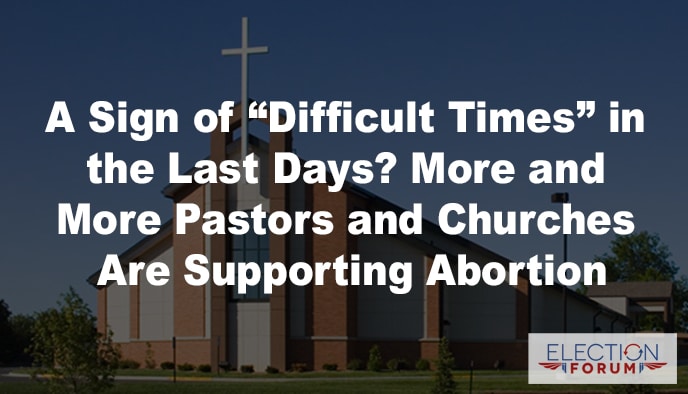 More and More Pastors and Churches Are Supporting Abortion

From coast to coast, more and more pastors and other faith leaders are supporting the taking of human life through abortion.

These examples are just the tip of the iceberg of a massive falling away from faith and sound doctrine by so-called “mainstream” churches.

Let’s look at each of them a little closer:

The Jewish rabbi believes the right to an abortion is a question of religious freedom. He thinks that if a woman believes abortion is ethical, the government shouldn’t prevent her from having one.

The same tortured logic could be used to justify allowing a Muslim to murder a Jewish person simply because the Muslim believes it’s ethical.

The Baptist pastor in the ecumenical group said God affirmed a woman’s right to choose an abortion before the Supreme Court did … but his reason: “…because it affirms a woman’s moral agency” makes no sense. A woman choosing to commit adultery would also affirm her moral agency, but it wouldn’t be a correct choice.

The doctor who was blessed by the faith leaders for performing late-term abortions said many of the women who come to his clinic ask him, “Is God going to forgive me?”

If these women were doing something ethical and “affirmed by God,” why would they be wondering if God was going to forgive them?

Forgive them for what?

When I hear about pastors and church leaders openly supporting the killing of innocent, unborn babies, I can’t help but think about the apostle Paul’s counsel to Timothy in the first few verses of 2 Timothy 3:

“But realize this, that in the last days difficult times will come. For men will be lovers of self, lovers of money, boastful, arrogant, revilers, disobedient to parents, ungrateful, unholy, unloving, irreconcilable, malicious gossips, without self-control, brutal, haters of good, treacherous, reckless, conceited, lovers of pleasure rather than lovers of God, holding to a form of godliness, although they have denied its power; avoid such men as these.” (2 Timothy 3:1-5)

The Greater Purpose Community Church in Santa Cruz, California already offers beer on tap both before and after worship services.

But the congregation plans to open a restaurant and brewery in a former bookstore building next year … and donate between 30% and 60% of the profits to Planned Parenthood and other local charities “that people of all faiths, all sexual, all racial… identities can support.”

“Jesus drank wine and had a reputation of hanging out in places where people consumed alcohol,” pastor Christopher VanHall said.

She testified before the Senate Judiciary Committee urging them to block the nomination of Brett Kavanaugh to the Supreme Court because he wrote a dissenting opinion in 2015 in which he stated he would grant exemptions to religious organizations allowing them to decline the Obamacare mandate to cover abortion-inducing contraceptives.

Her reason, she said, is that “Jesus directs us to advocate for a just society that allows people to live their lives to the fullest.

She then misquotes John 10:10 and gives a twisted, convoluted, out-of-context interpretation of the verse, arguing that it means Christians should support “access to affordable birth control, because by permitting individuals to plan if, whether, and when to become pregnant, birth control allows us to live our fullest lives.”

Baker quoted Jesus as saying in John 10:10, “I have come that you might have life, and have it to the full.”

But that’s not what Jesus said…

It’s important to know that Jesus was talking to the Pharisees in John 10 after he had healed a man in John 9 who had been born blind. Here’s the context:

So Jesus said to them [the Pharisees] again, “Truly, truly, I say to you, I am the door of the sheep. All who came before Me are thieves and robbers, but the sheep did not hear them. I am the door [Jesus repeats the analogy]; if anyone enters through Me, he will be saved, and will go in and out and find pasture. The thief comes only to steal and kill and destroy; I came that they may have life, and have it abundantly [to the full].” (John 10:7-10, NASB)

Who is they in John 10:10? They are the ones who have been saved – who have entered the sheepfold – through Jesus.

A full and abundant life is found in having a personal relationship with Jesus, not in seeking government funding for abortion-causing contraceptive devices.

The misguided teachings and beliefs revealed in all three of these examples – and those who agree with them – illustrate the truth of 2 Timothy 4, where Paul warns Timothy:

“For the time will come when they will not endure sound doctrine, but wanting to have their ears tickled, they will accumulate for themselves teachers in accordance to their own desires, and will turn away their ears from the truth and will turn aside to myths.” (2 Timothy 4:3-4)

4 Comments on “A Sign of “Difficult Times” in the Last Days? More and More Pastors and Churches Are Supporting Abortion”