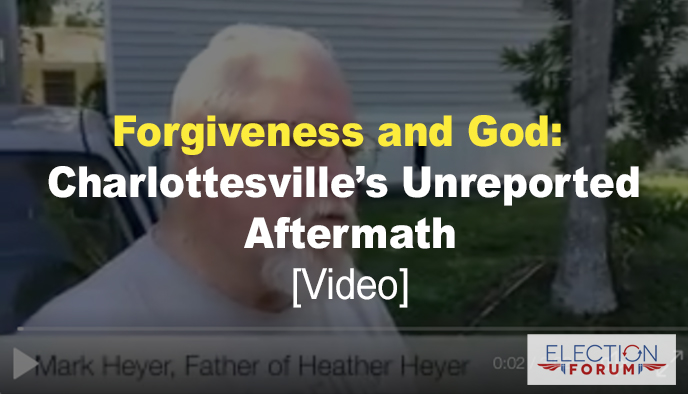 But more so for the parents of 32-year-old Heather Heyer, killed protesting a rally by Nazis and white supremacists.

Her father, Mark Heyer, urged forgiveness, and began that painful process by forgiving the man who drove his car into a crowd of protestors, striking his daughter.

“People need to stop hating and forgive each other,” he said.

“The guy who did this, he doesn’t know any better. … I remember what the Lord said on the cross, Father forgive them, they don’t know what they’re doing.”

Hate and racism is in the spotlight.

But God’s love is the answer to stopping the hate.

As Christians, we can:

As Christians and Americans, we can acknowledge that:

Former President Ronald Reagan addressed this disturbing trend for bigotry and violence in America when in 1981 he said:

Bigotry and violence is perpetrated by groups who still adhere to senseless racism and religious prejudice. … You are the ones who are out of step with our society. You are the ones who willfully violate the meaning of the dream that is America. This country, because of what it stands for, will not stand for your conduct.”

What does God’s Word say about hatred?

I am convinced we must have God’s divine guidance in our lives, that “Greater is He who is in us than he who is in the world.” (1 John 4:4).

To end all this hating, it must start with us, following the personal outline in Ephesians 4:31:

“Get rid of all bitterness, rage and anger, brawling and slander, along with every form of malice.”

Only then can we begin to see others as fellow human beings.

One Comment on “Forgiveness and God: Charlottesville’s Unreported Aftermath [Video]”