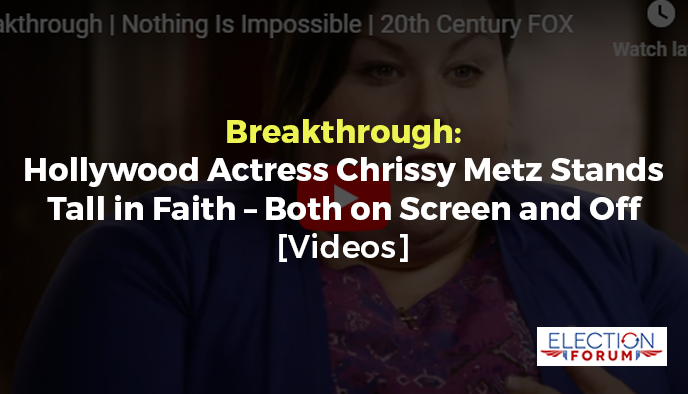 He fell through the thin ice of a frozen Missouri lake…

He was trapped underwater for 15 minutes…

He had no pulse for 45 minutes…

But when John’s mom – played by Chrissy Metz – held his cold feet at the foot of the hospital bed where he had been declared dead … and cried out to God to save her son’s life … a series of miracles began to take place.

To the astonishment of everyone in the room, her prayers were answered as John’s heart suddenly began to beat again, defying every expert, every case history, and every scientific prediction.

Mere days after the accident, he walked out of the hospital under his own power, completely healed.

Joyce’s faith reminds me of the incident in which Jesus told his disciples, “… truly I say to you, if you have faith the size of a mustard, you will say to this mountain, ‘Move from here to there,’ and it will move; and nothing will be impossible to you.” (Matthew 17:20)

Breakthrough is a must-see true-story account of the power of prayer … and faith.

The story has had a profound impact on everyone who has been a part of it:

And it will have a profound impact on you…

It’s scheduled to be released in theaters on April 27th.

Chrissy Metz – known for her work on the NBC hit show “This is Us” – says she is unashamed about her faith in God, although it may be considered “uncool.”

She believes faith goes hand and hand with surrender to God…

“There’s times where you really feel like, it’s never going to get better, you’re down and out and we get in our heads and we build this fear around something that the only person, or the only thing that can subside that, is our faith in God. I know that from a personal plight of my life.”

Watch highlights from the movie and hear reactions from the actors and producers to the true story of John Smith (about 5 minutes).

One Comment on “Breakthrough: Hollywood Actress Chrissy Metz Stands Tall in Faith – Both on Screen and Off [Videos]”