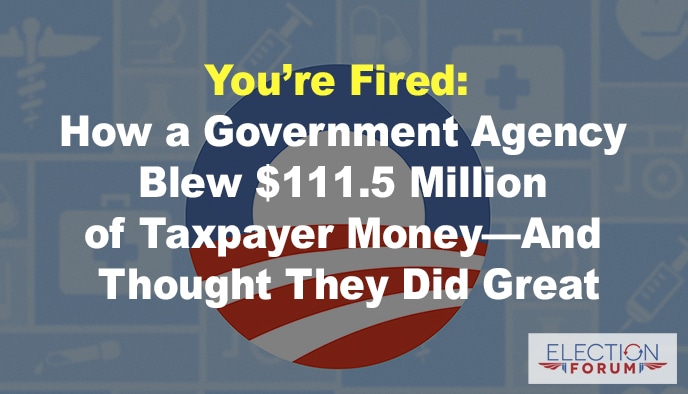 They spent $111.5 million on advertising and marketing and lost 30,000 customers.

As president of an advertising agency, they should all be fired…

But typical of a government bureaucracy, they think they did great … and they want more of your tax money.

Since they are unaccountable, the waste of tax dollars goes on.

Let’s look at this unreported failure…

Obamacare spent and wasted $10 million in national advertising for 2017-2018.

But that’s nothing compared to the outrageous waste of taxpayer money by the California government.

Covered California is California’s own healthcare exchange….an arm of the failing, messy system of Obamacare.

Covered California is riddled with problems … complications for consumers and rising premiums … plus low-quality coverage and low-quality healthcare.

Despite all of this, they continue to spend tax money with little accountability.

Approximately $45 million is devoted to ads, which includes:

Compared to the $10 million advertising budget of healthcare.gov – the national arm of Obamacare – Covered California spent more than 10 times as much as all the states combined that participate in healthcare.gov.

Here are 4 disturbing things you need to know about this massive waste of $111.5 million:

The huge $111.5 million-dollar budget has been explained as a solution to “consumer confusion” about Covered California…but much of their marketing approach is a total waste of tax money.

As a 40-year advertising veteran, I’ve worked on hundreds of campaigns. This budget was bloated … a waste … and quite frankly, as an 86-time winner of ad awards—ridiculous.

For example, Covered California’s freehanded and lazy approach to spending money on marketing even includes $100,000 for painted murals across the state…scenes that are irrelevant to insurance enrollment.

One of the murals shows a woman with a bowl on her head, with children riding bikes and a basketball player coming out of it.

This is money that could have been spent on lowering premiums…but instead was used to commission public art that has little to do with health care.

Another marketing effort with questionable return on investment has been a Covered California bus tour that further promotes their message, “Life can change in an instant.”

This does little to explain how the system works, or to clear up “consumer confusion.”

Much of the rest of the budget goes to navigators – people who help with sign-ups for Covered California – and staff budgets.

Tens of millions are being poured into their advertising, but is the budget being accounted for?

Let’s look at the results:

This is an embarrassing failure … and a shocking loss of taxpayer money … spent on unproductive and unaccountable marketing efforts.

And they should be fired … But they won’t be.

They will ask for more money to “fix” the problem.

Covered California is one of 11 states (plus the District of Colombia), that has its own health care exchange.

The rest of the states use the healthcare.gov site, which has dramatically slashed its budget from $100 million to $10 million in their nationwide campaign in 2016.

Healthcare.gov has also cut its budget for navigators, from $63 million to $37 million…a budget cut put into place under the Trump administration.

Healthcare.gov cut their budget…and also saw an approximately 4% decrease in enrollment, from 9.2 million to 8.8 million in 2018.

In California, the marketing budget amounted to approximately $73.35 per enrolled person.

It’s a shocking misuse of money—a total waste of taxpayer dollars on Obamacare and its broken, corrupt branch, Covered California.

Covered CA’s budget is comparable to the budgets of the most valuable brands in the world – who spend hundreds of millions of dollars a year on marketing—but also bring in billions in revenue.

Take a look at the following examples:

Covered California, on the other hand, is an inefficient government agency that offers reduced health care quality and skyrocketing premiums.

I’ve spent over 40 years as owner of a national ad agency.

But the reality for a marketing budget is lower, even for large companies.

A $5 to $25 million advertising budget is considered a huge amount. Very few would even be able to justify going over this range unless you’re an arrogant bureaucrat spending other people’s money.

The most disturbing part is that Deep State politicians are working hard to pour even more money into this massive program of waste.

Covered California – and its parent system, Obamacare – are politically motivated, ideologically-driven programs put into place to advance a socialist agenda and big government.

For example, when you sign up for Covered California, you can also register to vote. No doubt that this process facilitates voter fraud in California—already a critical issue and dangerous threat to our voting system.

Here’s a list of radically progressive foundations and groups that receive a massive amount of taxpayer funding to advance their agendas:

The Deep State makes sure that our taxpayer dollars are spent on keeping their bloated government agencies with their massive budgets in place … and on promoting their radically progressive/socialist agenda for the nation.

2 Comments on “You’re Fired: How a Government Agency Blew $111.5 Million of Taxpayer Money—And Thought They Did Great”