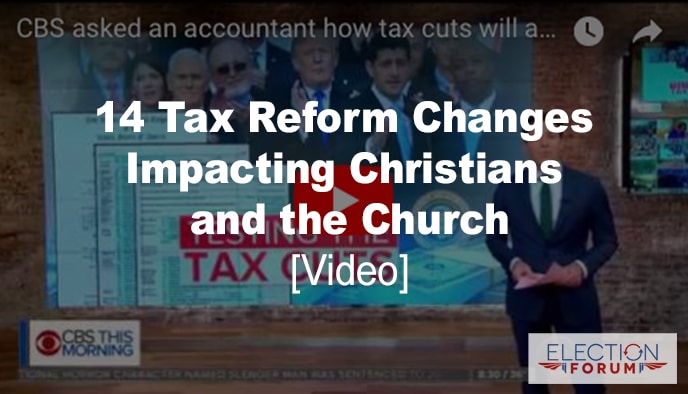 Many are confused by the lies of the media and the politicians regarding the impact of the tax reforms contained in the Tax Cuts and Jobs Act (TCJA).

Their lies are based on their ideology, not on economic reality:

But slowly the truth is getting out…

CBS asked 3 families in different circumstances from 3 different parts of the country to submit their tax returns from last year. Then they had an accountant calculate how the new tax law would affect their tax bill in 2018. The results may surprise you. Watch the 4 ½ -minute video below:

Because they want you to think that THEY care about the middle class and President Trump doesn’t.

They want you to think – as they have claimed repeatedly – that President Trump only wants to use his position to enrich himself and his businesses.

But here are the economic facts:

While the TCJA will increase your paychecks by lowering your federal withholding, the changes in how your tax return is prepared will not go into effect until you file your 2018 tax return in 2019.

Also, the phase out – the income level above which the credit is reduced or eliminated – is now more than double what it used to be.

Fewer taxpayers will need to itemize deductions under the TCJA. This will greatly simplify the tax preparation and filing process for many taxpayers.

This will remove the tax penalty imposed on pro-life taxpayers who prefer to not purchase insurance if there are no policies in their states that exclude coverage for abortion.

This will impact high-income taxpayers in high-tax states such as California, Illinois, New Jersey, New York and Connecticut.

The final TCJA differed from what President Trump originally advanced, but as a compromise, it’s a move in the right direction.

If you would like more detailed information about these other changes, google “Tax Cuts and Jobs Act.” The articles by the Tax Foundation and by H&R Block are thorough.

But wait and see, as

Again, watch the short video above … it will show you the truth.