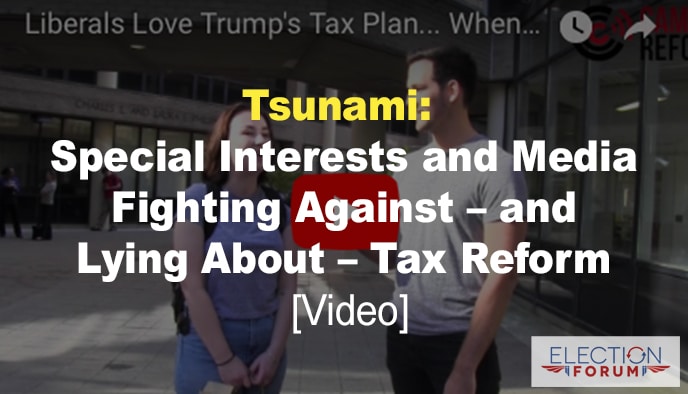 Don’t believe the special interest lies or the media distortions.

You … and all Americans … will benefit from tax reform.

The average American family will get a $4,000 raise under President Trump’s proposed tax reform plan.

And it will set the stage for historic economic growth, jobs and pay raises.

The new tax reform plan, proposed by President Trump, is geared to put money in you and your family’s pockets.

But a full-on war has broken out.

Special interest groups, labor unions and the biased media have come out full force against any tax reform.

In fact, a coalition of liberal groups and unions are spending thousands of dollars on TV ads, Facebook, emails and more, blasting Trump’s “economic stimulus” tax plan as a giveaway to the rich.

As a small business owner, I have seen how crushing the regulations and taxes have been on my clients and competitors.

It’s robbed people of jobs, income raises, and so much more.

And, as a small business owner, I can tell you that tax reform will have such a dramatic, positive impact on business that we will see a historic economic boon, maybe the largest in U.S. history.

Without this tax reform, we will probably see a crash in the stock market and a depression.

Political progressives like Bernie Sanders, Elizabeth Warren and Obama before them, love to divide America by wealth.

They gloss over the fact “the rich” pay their fair share of taxes AND MORE.

Using 2014 statistics, those making over $250,000 paid over half (55%) of all individual income taxes collected, even though they accounted for only 2.7% of all returns filed.

To the Left, “the rich” is a one-size-fits-all label for “evil people” who don’t deserve the wealth they’ve created.

That argument is pure socialism, which is their ultimate goal for America.

By sowing misinformation and half-truths, the special interests and press could kill the economy turnaround that has just begun.

Don’t be fooled by the media distortions and Facebook lies …

… President Trump’s tax reform plan will be a boon to you and your family.

After 8 years of painful stagnant economic growth in America, tax reform is critical to turning the economy around.

3 Comments on “Tsunami: Special Interests and Media Fighting Against – and Lying About – Tax Reform [Video]”