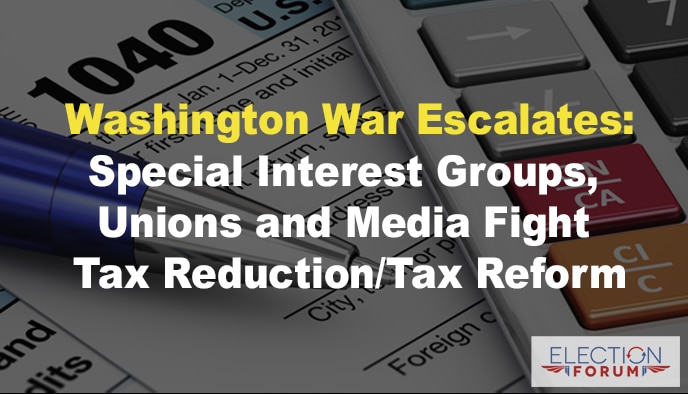 The new tax reform plan, proposed by President Trump, is geared to put money in you and your family’s pockets.

But a full-on war has broken out.

Special interest groups, labor unions and the biased media have come out full force against any tax reform.

In fact, a coalition of liberal groups and unions are spending thousands of dollars on TV ads blasting Trump’s “economic stimulus” tax plan as a giveaway to the rich.

A liberal’s idea of economic growth is seen in terms of how big the government can get.

Their idea of making money is to tax – and spend – spomething that creates low wages, slows a non-existent economic growth and kills job creation.

Plus, political progressives like Bernie Sanders, Elizabeth Warren and Obama before them, love to divide America by wealth.

They gloss over the fact “the rich” pay their fair share of taxes AND MORE.

Using 2014 statistics, those making over $250,000 paid over half (55%) of all individual income taxes collected, even though they accounted for only 2.7% of all returns filed.

To the Left, “the rich” is a one-size-fits-all label for “evil people” who don’t deserve the wealth they’ve created.

That argument is pure socialism, which is their ultimate goal for America.

To listen to the Left, “the rich” get no credit for keeping the economy growing, creating jobs or bankrolling innovations and making technological advances.

But that’s just one side of the argument.

The big picture is this: Trump’s tax reform plan is designed to benefit everyone by putting more money in your pocket.

By sowing misinformation and half-truths, the special interests and press could kill the economy turnaround that has just begun.

Don’t be fooled by the media distortions and Facebook lies …

… President Trump’s tax reform plan will be a boon to you and your family.

After 8 years of painful stagnant economic growth in America, tax reform is critical to turning the economy around.

Not only will cutting taxes help energize the economy, increase wages and grow more jobs, but in the case of working middle-class Americans it will:

Once more the progressive pro-socialistic politicians and media are portraying tax cuts as only benefiting the rich.

The greatest job creators in the world are the small business owners, of which I am one.

We are trying to run successful businesses and provide for our families, but are being held back by an outdated, complicated tax code.

We must simplify Tax Day to one postcard anyone can fill out without knowing the the pan card meaning or knowing how to use software or a CPA.

Fixing this will strengthen our local economies.

HOW MAJOR TAX REFORM IS CRITICAL TO YOU AND YOUR FAMILY

Major tax reform is critical to fueling our country’s economy.