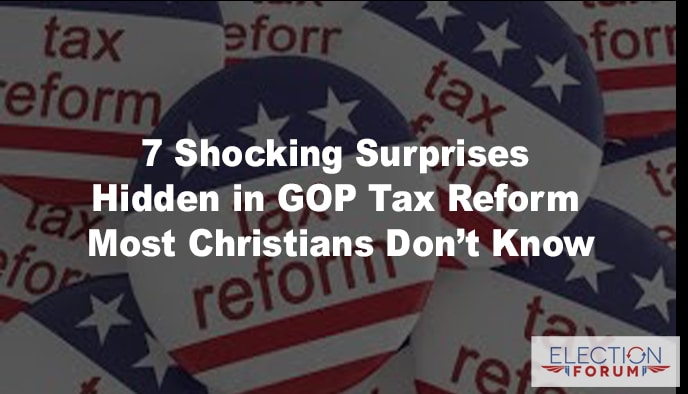 Here are 7 surprising changes in the GOP Tax Reform bill you need to know about. While any of the provisions below could be modified or changed in the final bill, look at what’s proposed:

You may have heard of the Johnson Amendment. It was proposed by Senator Lyndon B. Johnson on July 2, 1954. It was agreed to without any discussion or debate and was included in the Internal Revenue Code of 1954. It prohibits churches from contributing to political campaigns, and pastors from publicly endorsing or speaking against political candidates.

The GOP tax reform bill would make it legal for pastors and other religious leaders to endorse candidates from the pulpit, but wouldn’t go so far as to allow other political activities such as financial contributions from churches to campaigns.

Spiritual leaders have a God-given responsibility to declare the whole counsel of God, which includes explaining how Biblical principles apply to every area of both individual life as well as community life.

This provision of the tax reform package will not only be advantageous to pastors…it will be a blessing to their congregations as well.

Contrary to what you may have heard, this bill is historic and will help you and your family. Why? Because it cuts taxes at ALL income levels – rich, poor, and middle class. Liberals don’t want you to know that the bill will result in:

According to the Tax Foundation, after-tax income for a typical middle-class family will increase by $2,598 under this plan…

But it’s not perfect…

Both the House and Senate have moved to restore the credit for adoptive parents of up to $13,570 of qualified expenses.

Adoption, especially a private one, can be very expensive. Preserving the tax credit can be a major factor in helping families afford adopting.

Many Christians believe this tax is anti-Biblical and immoral.

Known as the estate tax, this is a tax levied on an heir’s inherited portion of the assets of an estate that exceeds $5.49 million after the death of both spouses.

For those who inherit businesses, high estate taxes often destroy their ability to keep their business going after the death of the owners.

Under the Affordable Care Act – also known as Obamacare – employers are forced to include birth control coverage, including abortion, in their health insurance plans… even if they have moral or religious objections to subsidizing the prevention of pregnancy or ending the life of an unborn child.

Some companies such as Hobby Lobby went to court, investing much time and expense to win judgments granting them an exemption from the law’s requirements.

But most small business owners do not have the time or the money to fight the federal government in court.

This doesn’t deny access of these services to any employee who wants them. It merely frees businesses from being forced to subsidize them through their health insurance plans.

The “marriage penalty” refers to

The current House and Senate tax reform bills don’t eliminate the marriage penalty entirely, but they reduce it greatly by setting the income thresholds for most marginal tax rates to be twice the amount for married couples as they are for single taxpayers.

While some previous deductible expenses are being eliminated in to offset doubling the personal exemption amount and reducing the marginal tax rates, the deduction for charitable contributions will be preserved…

Plus, almost every reader can file their own federal tax return on a post card!