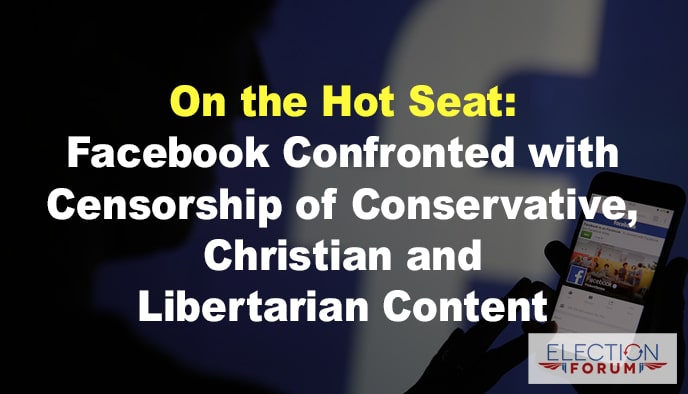 Zuckerberg was evasive in answering many of the questions – which focused more on political speech and censorship than on data privacy.

He appeared stiff and uncomfortable … and defiant … and he contradicted himself during his testimony.

He told Senator Ted Cruz (R-TX) that Facebook’s goal is to be “a platform for all ideas.”

But then he said, “There is certain content that clearly we do not allow…”

After specifically mentioning “hate speech” … “terrorist content” … and “nudity” … he then added, “anything that makes people feel unsafe in the community.” [emphasis added]

Diamond and Silk – the black female conservative commentators who are staunch Trump supporters – recently received an email from Facebook informing them that their videos were judged to be “unsafe for the community.”

When questioned about this obvious conservative censorship, Zuckerberg stiffly declared it to be “an error” on the part of his evaluation team … and that it was being corrected.

Representative Steve Scalise (R-LA) read a quote from Campbell Brown – leader of Facebook’s news partnership team – in which she described the February  “trusted sources” algorithm change as, “This is us changing our relationship with publishers and emphasizing something that Facebook has never done before: It’s having a point of view, and it’s leaning into quality news…”

Zuckerberg – when asked directly by Scalise if the quote he read was an accurate statement – told him it was not.

But Zuckerberg himself said – when he announced the algorithm change – “There’s too much sensationalism, misinformation and polarization in the world today…This update…will only shift the balance of news you see towards sources that are determined to be trusted by the community.”

Determined by whom to be trusted?

Certainly not by the individual user…