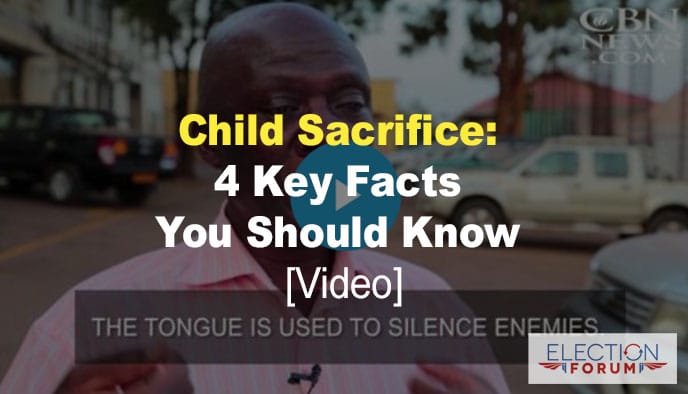 The most epic and intense war taking place in the world today is the battle between God and Satan.

No better example can be given than what’s taking place today in Uganda.

Amid widespread reports of revival sweeping through Kampala and across the country, witchcraft and the practice of child sacrifice is also increasing.

As Christians, we can’t ignore what’s happening just because it’s taking place in a far away country. Here’s what you should know:

The people of Uganda are very spiritual. Those who don’t believe in God and the Holy Spirit believe in evil spirits. They will consult a witchdoctor if they are seeking:

Depending on the outcome desired by the client, either animal sacrifice or human sacrifice may be demanded.

After the client has paid a large fee, the witchdoctor

The Uganda Human Rights Commission published a report in 2014 warning that official statistics of child sacrifice in Uganda are inaccurate.

The African Network for the Prevention and Protection Against Abuse and Neglect (ANPPCAN) reports that almost 3,000 children disappear from their homes every year.

Even ONE case of child sacrifice is too many.

At least 4 actions can and are being taken to stop the practice of child sacrifice in Uganda:

Click the link below to watch two powerful videos produced by CBN News. The first describes the business of child sacrifice and traces the lives of 3 survivors of the brutal practice (about 6 minutes). The second (about 2 minutes) tells the story about a witchdoctor who became a Christian and started a church which is thriving today and working toward stamping out child sacrifice.