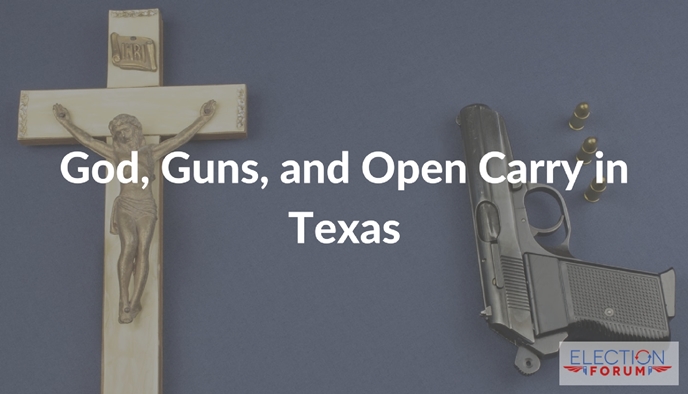 We all trust in God to keep us safe.

He invites us to take necessary precautions, too.

In churches, larger congregations have begun providing armed security measures in the face of terrorist threats. Protections against mentally disturbed individuals and disgruntled workers have motivated more churches to follow Jesus’ command to His disciples: “He that hath a purse, let him take it, and likewise his scrip: and he that hath no sword, let him sell his garment, and buy one.” (Luke 22: 36)

But should we go so far as to allow open carry for firearms in churches?

Beginning in 2016, Texas has permitted all licensed gun owners with concealed carry permits to openly carry their firearms, either on their holsters or shoulder straps.

But businesses and churches are worried: should patrons and parishioners be allowed to carry or not to carry openly? They want to stand for individual patrons’ rights, but fear scaring away future patrons.

Still, for all the injunctions against fear in the Bible, should parishioners start packing heat as they pack the pews?

In Texas, Catholic Bishop Placido Rodriguez issued a letter on Texas’ open carry law to the Lubbock Avalanche-Journal, stating “The Dioceses of Lubbock intends to prohibit the possession of any weapon at any facility owned, leased or operated by the Diocese of Lubbock.” No word yet on Rodriguez’ directives to local pastors regarding signs to inform incoming parishioners.

Now for the good news: over the past year, gun crimes and gun deaths have fallen dramatically across the state of Texas, even more than in years past!

Concealed carry and open carry laws have not lead to an arbitrary uptick in gun deaths, as liberal gun-control advocates have asserted. Open carry states have a recognizably lower crime rate, too!

But still, the question persists: Do God and guns mix? Tell me your thoughts at craig@electionforum.org

One Comment on “God, Guns, and Open Carry in Texas”