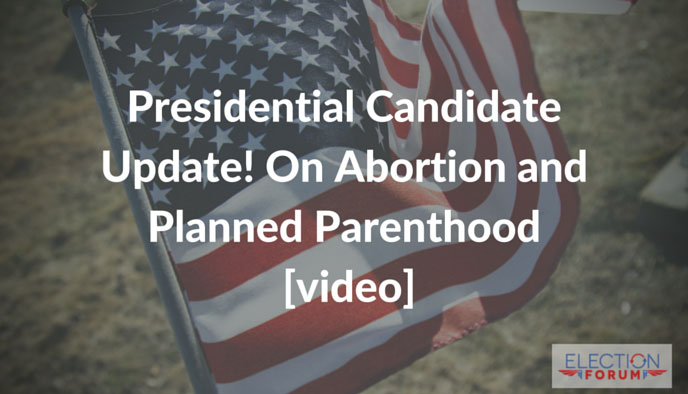 Here is a brief update on what some Presidential candidates are doing and saying about abortion.

In Wisconsin, Gov. Scott Walker says he supports a bill currently in the legislature that would cut off some grant funding to Planned Parenthood.

He has already signed one bill to cut some Planned Parenthood funding and has advocated that abortion be defunded throughout the nation state by state.

He has also signed into law a bill for Wisconsin that bans abortions after 20 weeks.

Sen. Ted Cruz has launched a new de-fund Planned Parenthood campaign: calling on pastors to get involved and speak out.

In a letter he sent to pastors across the country, Sen. Cruz says:

“We cannot allow this [funding] to continue. Only our pastors and church leaders have enough influence to put a stop to this holocaust.”

He’s hosting a nationwide conference call with pastors to discuss how they can use this influence to stop taxpayer funding of Planned Parenthood.

Now, Planned Parenthood is suing Louisiana over it.

Gov. Jindal’s spokesperson cited a cancellation provision in the state Medicaid contract that allows either party to cancel at will. He stated that Gov. Jindal will be standing by his decision and that the Department of Health and Hospitals merely “exercise[d] [its] right to cancel the contract without cause.”

“What I have advocated is that we pass law in this country that says all human life at every stage of its development is worthy of protection. In fact, I think that law already exists. It is called the Constitution of the United States.”

At a rally in Ohio, Sen. Rubio called on Congress to de-fund Planned Parenthood. He suggested that we take the money and distribute it to health centers that are actually providing women with health care without committing the “atrocious activities” revealed in the Planned Parenthood videos.

He also points out in a letter that Planned Parenthood dehumanizes not only the unborn but women as well.

“The videos reveal that Planned Parenthood views the women that they purport to serve as nothing more than profit centers for their macabre business. One of the videos shows a senior Planned Parenthood official speaking casually about the tactics she employs in order to deceive patients so that their unborn children can be better utilized for organ and limb harvesting. This is a violation of the rights of their patients.”

Note: If you didn’t see his amazing debate on CNN, see here.