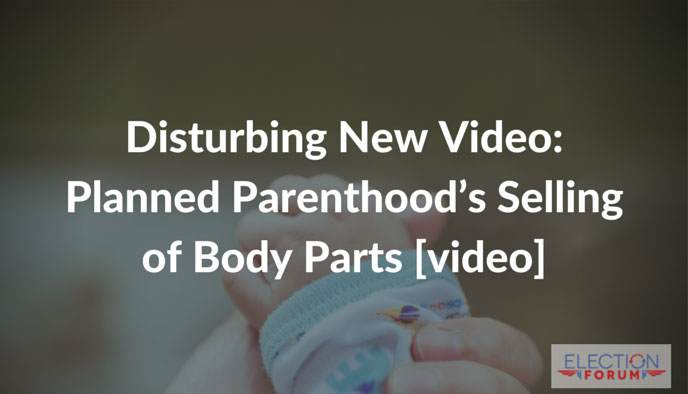 Warning: the content of the video, discussed below, is disturbing.

But in the video expose just released , Melissa Farrell (director of research for Planned Parenthood Gulf Coast) states that PP gets a “good revenue stream” from the fetal organs, which “contributes so much to our bottom line.”

She also states that they can alter their abortion procedures to obtain intact fetal cadavers. It’s very likely this means partial-birth abortions, i.e. delivering the baby alive then killing it. Infanticide.

The video then shows the undercover reporter asking for specimens in the lab. A lab worker laughs and says, “We had a long day, and they’re all mixed up together in a bag.” But she produces one of 20-week old twins, and they proceed to sort through lungs, intestines, and limbs, talking about how “organs come out really, really well – almost intact.”

David Daleiden, from the group producing these videos, emphasizes that everyone who’s seen these videos has now seen Planned Parenthood’s “barbaric practices” and “atrocities against humanity” and that PP SHOULD NOT be receiving half a billion taxpayer dollars annually.

A bill was introduced in the U.S. Senate last Monday to defund Planned Parenthood. It didn’t pass.

But, eight Republicans supported funding PP in 2007; this time only one did – Sen. Mark Kirk of Illinois.

The left uses all kinds of deceptive phrases to draw people’s attention away from their atrocities. They call pro-life efforts a “war on women,” they call babies “fetal tissue,” and they call the murdering of children “reproductive rights.”

But the evil is now again staring us in the face: abortionists and other workers so calloused that they can laugh about body parts in a bag.

Here are some statements regarding the recently released videos from liberal Democratic leaders:

Sen. Barbara Boxer: “It’s a war on women’s health, it’s not about abortion. Planned Parenthood spends 97% of its dollars on non-abortion related services… They serve 2.7 million people in America every year, 500,000 of those happen to be Hispanic. It is a very important health care organization, and this attack started from the day Planned Parenthood was founded in 1916, when the founder of Planned Parenthood was arrested for trying to distribute birth control to poor women. So it’s a constant battle here. I can’t believe in this century we are still battling against women’s health.”

– The REAL war on woman is an industry committed to making money off of killing women’s babies, telling these mothers that their baby is only a “lump of tissue” in order to do so. Every single doctor that performs abortions is telling these mothers bold faced lies when they say this. Of course, PP also gives no warning about the trauma and regret that haunt women after they have abortions.

Planned Parenthood, the nation’s largest abortion-provider, “performs about 330,000 abortions a year, or roughly 30 percent of all the abortions in the country.”

“By Planned Parenthood’s math, a woman who gets an abortion but also a pregnancy test, an STD test, and some contraceptives has received four services, and only 25 percent of them are abortion. This is a little like performing an abortion and giving a woman an aspirin, and saying only half of what you do is abortion.”

“The 3 percent figure is derived by counting abortion as just another service like much less consequential services. So abortion is considered a service no different than a pregnancy test (1.1 million), even though a box with two pregnancy tests can be procured from the local drugstore for less than $10.”

“Such cracked reasoning could be used to obscure the purpose of any organization. The sponsors of the New York City Marathon could count each small cup of water they hand out (some 2 million cups, compared with 45,000 runners) and say they are mainly in the hydration business. Or Major League Baseball teams could say that they sell about 20 million hot dogs and play 2,430 games in a season, so baseball is only .012 percent of what they do.”

And the other services they claim will be unavailable to women if they’re defunded – pap tests, contraception, pregnancy tests, cancer screenings, etc. – are provided at low or no cost by the CDC, state health departments, and countless medical and non-profit health and pregnancy clinics.

– Finally, the founder that Sen. Boxer referred to, Margaret Sanger… she was a eugenicist.

Sen. Bernie Sanders: “I will defend Planned Parenthood. I think a lot of this attack, to be honest with you, comes from people who simply do not believe that a woman should have a right to control her own body. That’s the motive.”

Sen. Sanders admitted, “I have not seen the videos.”

Here’s a briefing on the fifth video that CMP has released.

Warning: the subject matter is very disturbing, as with the other videos.