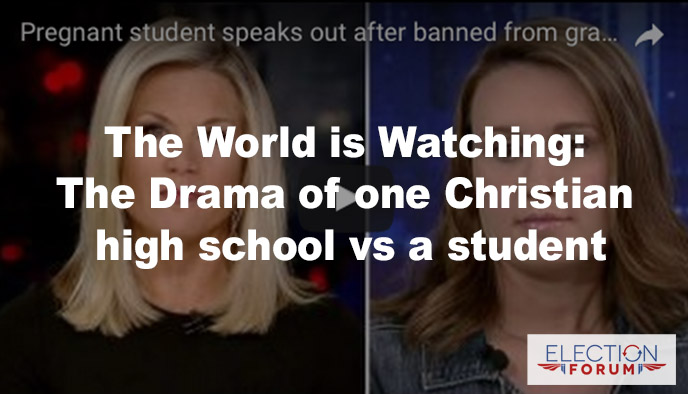 Parents send their kids to a Christian school for a better education, a Christian worldview curriculum and a culture of students and teachers representing Christ.

They won’t get these in a public school.

But what does a Christian school do when a student violates its code? How should it respond?

Millions are now watching the drama play out at a small Christian high school of only a graduating class of 15 students.

One of its students, Maddi Runkles is being disciplined for becoming pregnant and not allowed to participate in the graduation.

Maddi voluntarily admitted she was pregnant and refused to get an abortion.

“Maddi is being disciplined, not because she’s pregnant, but because she was immoral,” wrote David R. Hobbs, administrator of Heritage Academy, about senior Maddi Runkles.

“Heritage is also pleased that she has chosen to not abort her son,” he wrote. “However, her immorality is the original choice she made that began this situation. Secondly, she will receive her diploma that she has earned.”

He noted that all students sign a pledge based on Philippians 4:8 (including language about “whatever is pure”) that “extends to my actions, such as protecting my body by abstaining from sexual immorality and from the use of alcohol, tobacco, and illegal drugs.”

But not all agree.

There is a 45 second video of portions of an interview with Dave Hobbs, the principal of Heritage Academy.

The world is going ballistic against the school.

And many Christians agree.

Students for Life President Kristan Hawkins said her organization remains concerned about the example the school is setting.

“By banning her and her alone, the administration and board collectively decided to make a public example of one student,” Hawkins wrote in a statement, “and has either intentionally or unintentionally communicated to the school community that pregnancy (not simply premarital sex) is a shame and should not be observed within our school community.”

In an earlier blog post, Students for Life said the academy’s treatment of Runkles will be remembered by her classmates because it “wasn’t with love.”

“A wise man told me that discipline is not the absence of love, but the application of love,” he said. “We love Maddi Runkles. The best way to love her right now is to hold her accountable for her immorality that began this situation.”

Here is Maddi being interviewed on Fox TV. See here.

13 Comments on “The World is Watching: The Drama of one Christian high school vs a student”