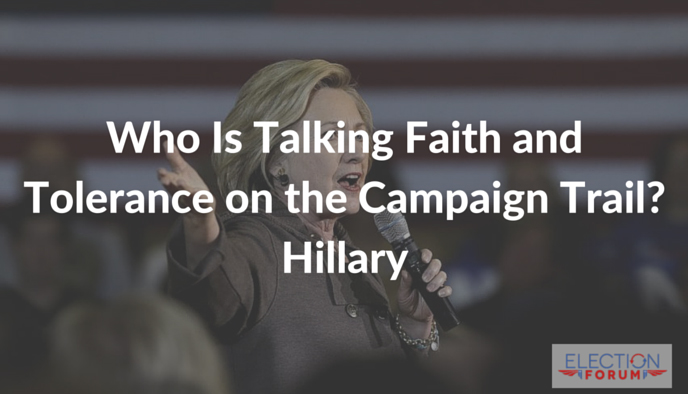 Hillary Clinton talked about faith on the Iowa campaign trail this past week.

Really. Not her faith in her abilities or her chances of winning, but her faith in God, and how it serves as a guide for her political life.

Normally, she does not talk faith and religion, but one prospective voter asked.

Hillary answered: “I am a person of faith. I am a Christian. I am a Methodist.”

She also mentioned that Christians are called to have a constant conversation about their values, and the actions which accompany them. For the former Secretary of State, the greatest commandment returned to “Love God with all your heart, mind, soul, and strength”, followed by “Love your neighbor as yourself.”

Clinton referenced a number of social Gospel talking points, including Jesus’ teachings during His earthly ministry: care for the poor, visit the sick and needy, help strangers, serve prisoners, etc. She further suggested that Christianity is too often presented as judgment and condemning. Her main Scripture reference for discussion and guidance? The Sermon on the Mount: “What is it calling us to do and to understand?”

The former First Lady also admitted her own imperfections, without naming the pending indictments against her for her email servers or allegations of corruption and bribery connected with the Clinton Foundation.

Her statements of conviction took a sharp turn when Clinton argued that Christian convictions about abortion will have to change. She then segued into fighting for equality rights and outcomes for women of all ages, in the United States as well as throughout the Third World.