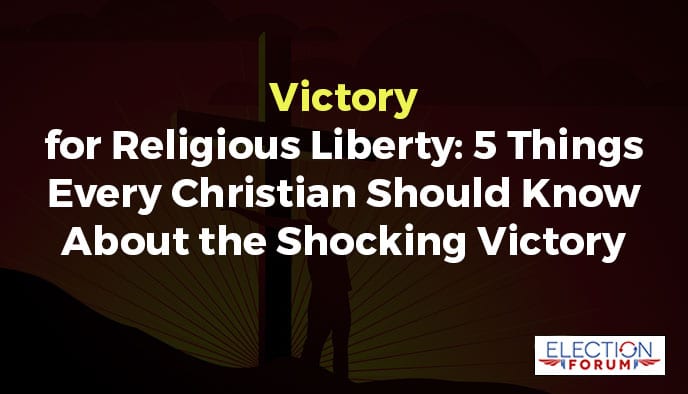 It was a victory for the First Amendment…

Here are 5 things every Christian should know about this decision:

1. The Arizona state Supreme Court justices that decided this religious freedom case were appointed by the governor.

All 4 of the justices who voted to uphold freedom of speech and freedom of religious expression were appointed by a Republican governor.

The 3 justices who voted to deny basic fundamental First Amendment rights were all appointed by a Democrat governor.

Yes … voting in state gubernatorial elections is critical, since in most states, Supreme Court justices are appointed by the governor.

2. The majority opinion of the court stated that forcing the two Christians to create messages celebrating same-sex marriage would be forcing them to violate their sincerely held religious beliefs.

Justice Andrew Gould – writing for the majority – said they had the right to refuse to express same-sex messages under Article 2, Section 6 of the Arizona Constitution … as well as Arizona’s Free Exercise of Religion Act.

He then wrote a highly critical comment directed at anyone who holds a biblical view of marriage:

“Duka and Koski’s beliefs about same-sex marriage may seem old-fashioned, or even offensive to some. But the guarantees of free speech and freedom of religion are not only for those who are deemed sufficiently enlightened, advanced, or progressive. They are for everyone.”

Clearly, in Gould’s opinion, those who believe in a biblical world view and a biblical view of marriage are not enlightened or advanced. They are uneducated and backward.

3. The ruling in Brush & Nib v. City of Phoenix was limited to just the “creation of custom wedding invitations.”

It was an extremely narrow ruling. It didn’t allow for “a blanket exemption from the [Human Relations] Ordinance for all of Plaintiffs’ business operations.

The majority opinion stated, “…we do not, on jurisprudential grounds, reach the issue of whether Plaintiffs’ creation of other wedding products may be exempt from the Ordinance.”

4. The Arizona Supreme Court ruling overturned the previous ruling of a judicial-activist 3-judge panel of the Arizona Court of Appeals.

The Court of Appeals had ruled unanimously against Duka and Koski in 2018, concluding that they “failed to prove that [the Human Relations Ordinance] substantially burdens their religious beliefs by requiring that they provide equal goods and services to same-sex couples.”

In their original ruling against the two artists, the City of Phoenix treated their custom wedding invitations as a product “like a hamburger or a pair of shoes.”

But they don’t sell identical invitations to anyone. Every invitation is different and unique.

David French – former director of ADF’s Center for Academic Freedom – wrote, “It’s worth repeating time and time again that refusing to advance a particular message is not the same thing as the refusal to provide a service.”

5. Progressives and socialists are whining that the Arizona Supreme Court ruling “opens the door for other bigoted owners to outright discriminate against LGBTQ people for who we are and who we love.”

This is the typical attitude of the progressives and socialists – they try to force everyone to agree with them – and if you refuse, you’re a bigot.

Don’t fall for this warped logic. It’s so misguided and wrong…

Brianna Westbrook – vice-chair of the Arizona Democratic Party – tweeted, “A business owner will now be able to post on their website or place sign on their front door stating “heterosexuals only.’”

Joanna Duka and Breanna Koski do not refuse to serve LGBTQ people … nor do they treat non-heterosexuals with disdain.

They respect and work with all people. But they will not promote all messages. This doesn’t make them bigots any more than refusing to vote for a particular candidate makes them bigoted against that candidate.

“’Free speech for me, but not for thee’ cannot be an American governing philosophy.”

One Comment on “Victory for Religious Liberty: 5 Things Every Christian Should Know About the Shocking Victory”