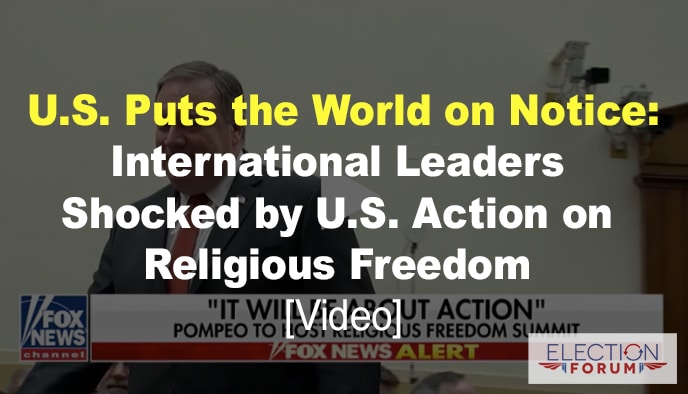 Worldwide, persecution of religious minorities is on the rise…

But worldwide, governments were shocked by a new stand taken by the U.S. government.

For the first time ever in U.S. history, the U.S. has both a Secretary of State … Mike Pompeo … and an Ambassador-at-Large for Religious Freedom … former Kansas Governor Sam Brownback … who both believe protecting religious freedom should be a top priority in U.S. foreign relations.

Their goal is to show other countries around the world that when they protect and promote religious freedom, it improves their security … and benefits their countries economically.

How will Pompeo and Brownback accomplish this goal?

Here are 2 initial steps which have just been announced this week:

The report provides guidance on the work that needs to be done to convince countries around the world that promoting religious freedom is in their own national interests.

It will be his first event with world leaders … and it will be on religious freedom.

It demonstrates to the world his top priority as Secretary of State.

“The United States will not stand by as a spectator,” Pompeo said. “We will get in the ring and stand in solidarity with every individual who seeks to enjoy the most fundamental of human rights.”

In the past, the U.S. has been deaf to the cries for help from persecuted religious groups.

Pompeo revealed the level of his commitment to fostering religious freedom around the globe in the following comments:

“Religious freedom is in the American bloodstream. It’s what brought the pilgrims here from England… Religious freedom was vital to America’s beginning. Defending it is critical to our future… President Trump stands with those who yearn for religious liberty. Our vice president stands with them, and so do I…

“Where fundamental freedoms of religion, expression, press, and peaceful assembly are under attack, we find conflict, instability, and terrorism. On the other hand, governments and societies that champion these freedoms are more secure, stable, and peaceful.

“We seek a world with less terrorism and more economic growth. You get both with religious freedom.”