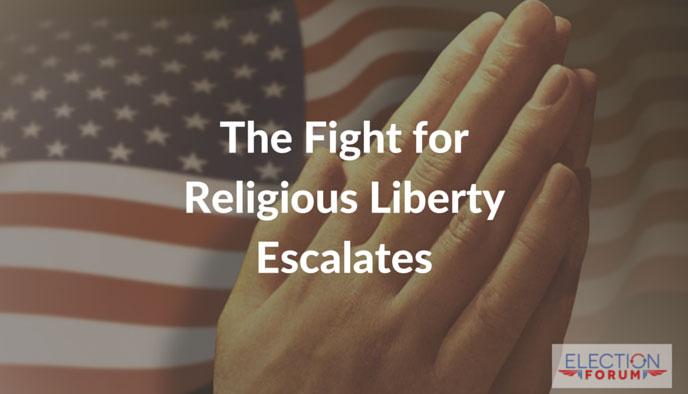 A Christian woman has been sent to jail for refusing to violate her faith.

The persecution of Christians is the civil rights cause of our day.

And now, Kim Davis, an elected county clerk in Kentucky, is the icon – a hero to supporters of religious liberty; a villain to those who see Christianity as the enemy and portray it as a mask for bigotry.

But the crucial issue in Kim Davis’ situation is not gay marriage – it’s religious liberty.

Even those not in public office – those who have their own private businesses – are being compelled to violate their religious beliefs about marriage or go to jail or go out of business. They are crushed with fines that destroy their businesses and livelihoods if they refuse to violate their beliefs and disobey God’s law. Bakers, florists, photographers are being forced to participate in gay weddings and CEO’s, fire chiefs, city recreation directors and others to violate their 1st Amendment rights.

Kim was a political prisoner, but she has not been taken captive spiritually. She stood firm.

Persecution in America is real

The thought that Christians in America would ever actually be imprisoned for refusing to endorse gay marriage has seemed impossible to many.

But that day is here.

The criminalization of Christianity has begun. Christians will have to choose: worship the false gods of immorality, or face the fiery furnace for “contempt of the court.”

This is no longer a rare case here and there. The numerous cases show that this is now systemic religious persecution.

But the persecution of Christians – although new in America – is not new. Christ says that his followers will be persecuted.

Pray for Kim Davis and all those in situations like hers.

And be encouraged by her example – we are all called to take a stand for God like she has done. Just like Daniel in the Scriptures, Kim Davis is supposed to be an example to all Christians who would defy the supreme ruler – unelected judges. Kim Davis is a martyr – an example that will inspire Christians to obey God rather than human authority.

What happened in the Kim Davis case?

Davis refuses to issue marriage licenses to same-sex couples because her Christian faith teaches that marriage is a sacred union God has ordained for one man and one woman only. She believes that authorizing anything else as a marriage (in her name) would defy God’s design for this sacred institution and violate her conscience.

Her request before the court would have been an easy accommodation: all she asked is that the law be changed so that she does not have to sign her name on the marriage licenses or, instead, to allow couples to get marriage licenses through another public official or online.

Any of these requests would have accomplished the Court’s legal objective and governmental interest while providing a reasonable First Amendment accommodation for religious exercise.

When Davis went back to work and still refused to issue these licenses, Judge Bunning ordered her imprisonment for “contempt of the court.”

People disagree about what Kim Davis did – some say that she was right in refusing to violate her conscience by authorizing something her God condemns. Others say that it was her job and she should have either issued those licenses or resigned if she could not fulfill her duties.

Reality Check: First Amendment protection is for everyone – government employees as well has private employees. And the free exercise of religion applies everywhere and at all times – at home, at church, in public, at work. The belief that religion has to be siphoned off to one’s own private life and home and has no place in the public square is utterly unconstitutional. Americans do not sign away their First Amendment rights when they become government employees.

In fact, there is a strong, well-established history of religious exemptions made for government employees and public officials regarding their job duties.

Regardless of whether one thinks Davis should have resigned, all should agree that imprisoning Kim Davis for her conscience is an outrage and a massive violation of her First Amendment religious liberty rights.

Kim Davis has been treated like a criminal. Jail is for criminals, not people of conscience. Never before has adhering to a government orthodoxy been a requirement for holding public office in America.

The strategy is to make Christians look like insincere, bigoted hypocrites in order to discredit their beliefs and the significance of God’s authority. This is how these liberal activists undermine and uproot the constitutional, fundamental right to freely exercise one’s religion.

In Kim Davis’ case: The media points out that Kim has been divorced three times and had a child out of wedlock. Then they point the finger and say “Hypocrite! Bigot!” What they neglect to mention is that this part of Davis’ story happened BEFORE she became a Christian. That omitted fact makes all the difference.

Many people writing about Kim Davis condemn her for thinking she can “choose not to obey the law” whenever “she feels like it.”

This re-frames the controversy to entirely eliminate the relevance of the First Amendment.

The free exercise of religion protects people from being forced by the state to disobey a higher authority – God. It is in the Constitution to acknowledge that the government and man-made law can never usurp God’s authority in its citizens lives – that when the government does try to take this authority, it has overstepped its bounds. The whole point is that God’s authority trumps man’s authority. The ability to obey one’s God and follow one’s conscience regarding divine authority is one of the most fundamental rights.

Framing Kim Davis’ religious beliefs as arbitrary, biased feelings of her own makes this no longer a First Amendment issue. And that’s what these activists want, because they want to ignore the First Amendment’s protection of religious liberty.

If Kim Davis’ reason for refusing to issue licenses was her own personal aversion to homosexuality, and not the authority of God commanding her to hold marriage sacred, then this wouldn’t be a religious liberty issue.

Yes, the law does have authority and does trump its citizens’ personal beliefs and opinions. No one gets an exemption to disobey the law “because they don’t feel like it” or because they don’t like the law. They don’t even get an exemption if they think a law is wrong or immoral. The First Amendment protects the American people from being coerced by the government to violate their consciences in regards to God’s law. It requires that government reasonably accommodate its citizens’ religious exercise.

Kim Davis said, “This has never been a gay or lesbian issue for me. This is about upholding the word of God.”

The Supreme Court – unelected judges – does NOT have authority to make law – and that is what they did in this decision. The right to same-sex marriage is found NOWHERE in the Constitution. They did not interpret law, they made it.

When the Supreme Court acted lawlessly in the Dred Scott case – ruling that slaves, even legally freed slaves, are not persons but property – Abraham Lincoln refused to accept it as the rule of law because it did not have that authority. The Supreme Court cannot make words mean whatever it wants them to and pretend it is “interpreting” the Constitution. The Constitution has a plain meaning, and the American people can hold their judges accountable to this Constitution. They should not embrace judicial tyranny as the “rule of law.”

The courts are NOT the avenue for this reform. The legislature is one avenue for reform, and the constitutional amendment process is another avenue, for fundamental reforms.

If the American people had accepted the Dred Scott decision as a settled matter and the rule of law, Lincoln said, they would have ceased to be a self-governing people.

In order to reform the laws allowing slavery in our nation, the American people passed the 13th and 14th Amendments to the Constitution.

The Supreme Court ruling in Obergefell v. Hodges was decided by five unelected, unaccountable people. These justices came up with a concept, a fundamental right to marry, that is mentioned nowhere in the Constitution – and then proceeded to define what marriage is and what this right means. Under the pretense of interpreting the Constitution, they overturned existing laws about marriage throughout the country and imposed new legislation about marriage on the American people.

The five justices of the majority in Obergefell did not interpret the Constitution. They imposed their moral views on a nation of 320 million American people. The court truly has become an eminent tribunal – we are no longer a nation of laws, but a nation of men.

Here are examples of other instances in which the rule of law has truly been trampled upon:

None of these were sent to jail.

No one condemned Martin Luther King Jr. for refusing to comply with “the rule of law.” In fact, he and Rosa Parks are celebrated because they were willing to be put in jail for the sake of a just cause. Martin Luther King Jr. wrote in his “Letter from a Birmingham Jail” that just laws are those in line with the moral law, the law of God. Mrs. Davis is not unlike these other American heroes.

Watch these great videos on religious liberty and Kim Davis:

Kim Davis speaks at rally after her release: http://www.cbsnews.com/live/video/kim-davis-speaks-at-rally/

Next week: Where the Presidential candidates stood on the issue. Can you guess?