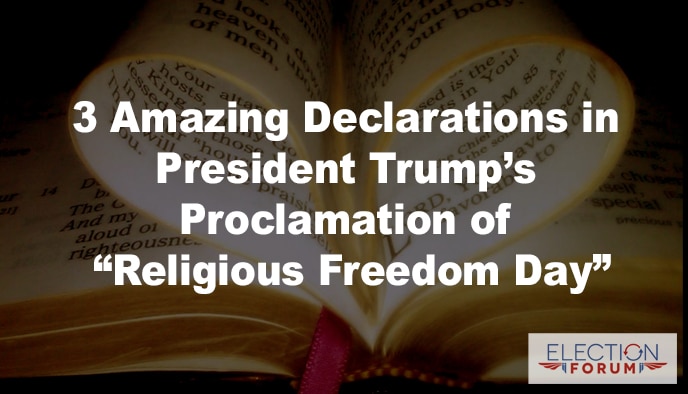 “Faith is embedded in the history, spirit, and soul of our Nation.”

This is the opening line of President Trump’s proclamation of January 16, 2018 as Religious Freedom Day.

The statute was written by Thomas Jefferson.

Sadly, this was ignored by the news media, social media and schools…

What sets President Trump’s proclamation apart from the Religious Freedom Day proclamations of past presidents are 3 significant affirmations:

1. Recognition of our religious history.

Often forgotten in today’s top-down centralized government approach to dealing with domestic issues is the belief by our founders that freedom is not a right granted by government … it’s a sacred right bestowed by God alone.

President Trump emphasizes this fact in the text of his proclamation.

This principle of freedom being above the purview of government formed the basis of the First Amendment to the U.S. Constitution.

2. Hope for freedom of conscience for those being persecuted in America for their faith.

President Trump points out that our constitution and laws guarantee Americans not only the right to believe as they see fit, but to freely exercise their faith.

President Trump has addressed these injustices with an Executive Order.

“No American,” says the president, “…should be forced to choose between the tenets of faith or adherence to the law.”

3. Hope for the persecuted church around the world.

President Trump believes that freedom of conscience is not just for Americans.

He pulls no punches: “We will continue to condemn and combat extremism, terrorism, and violence against people of faith, including genocide waged by the Islamic State of Iraq and Syria against Yezidis, Christians, and Shia Muslims.”