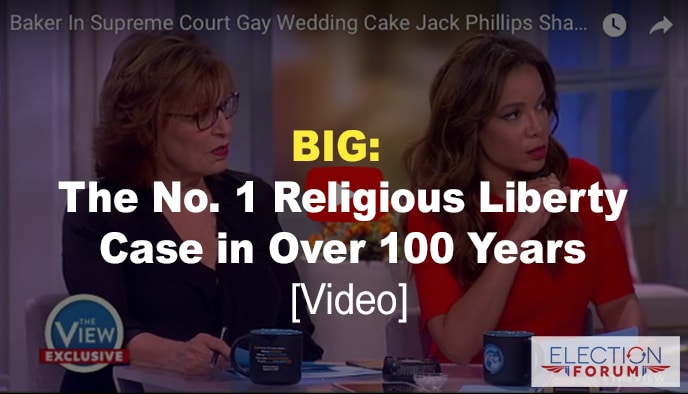 The Supreme Court is about to hear the biggest religious liberty case in over 100 years.

Even President Trump shocked the Christian and secular worlds by coming out in support of Christian freedom.

It’s time for Christians everywhere to take a knee…

…And pray that the Supreme Court rules in favor of Jack Phillips, the Colorado cake artist who stood by his conscience and politely declined to design a wedding cake for a same-sex ceremony.

As a Christian, Jack believes the Bible is clear that marriage is only between a man and a woman.

But the government is forcing Jack to violate his deeply held religious beliefs.

The court’s ruling will set a precedent for religious freedom.

Phillips has received death threats while the case plays out.

“Nobody should be forced to choose between their profession and their faith. Jack told the suing couple he would sell them anything in the store, but his deeply held beliefs prevented him from designing a cake for them,” said his lawyer.

To the surprise of Christian leaders – and the secular world — even Trump came out on the baker’s side.

The Justice Department is urging the Supreme Court to side with Phillips.

“Forcing Phillips to create expression for and participate in a ceremony that violates his sincerely held religious beliefs invades his 1st Amendment rights, Acting Solicitor General Jeff Wall wrote in a brief sent to the court.

CNN wasted little time attacking the brief, taking the progressive liberal viewpoint that it was “unprecedented for an administration to argue in favor of a constitutional exemption to antidiscrimination laws – a constitutional right to discriminate.”

Since when is someone adhering to deeply held Biblical values discrimination?

There are progressive forces at work that believe Christians should violate their religious and moral convictions.

That is why the Phillips case has ramifications for every American of any faith.

The right to speak freely and differ on issues that matter, without fear of government punishment is what sets us apart from totalitarian regimes.

At the heart of this “religious case” is the continuing expansion of anti-discrimination laws.

What began as well-justified efforts to reign in racism, sexism and anti-Semitism have mutated into laws protecting against the “harm to dignity.” The guilty party is anyone who disagrees with progressives on human sexuality.

So, won’t you pray with me:

I pray that this ruling not only honors God, but rewards Phillips as a good and faithful servant. 2 Chronicles 15:7 tells us:

“But as for you, be strong and do not give up, for your work will be rewarded.”

I delight in the fact our God is in charge. Proverbs 16:9 says:

“In their hearts humans plan their course, but the Lord establishes their steps.”

Now, watch this powerful 11-minute video on Jack Phillips humbly defending himself on “The View” this June.