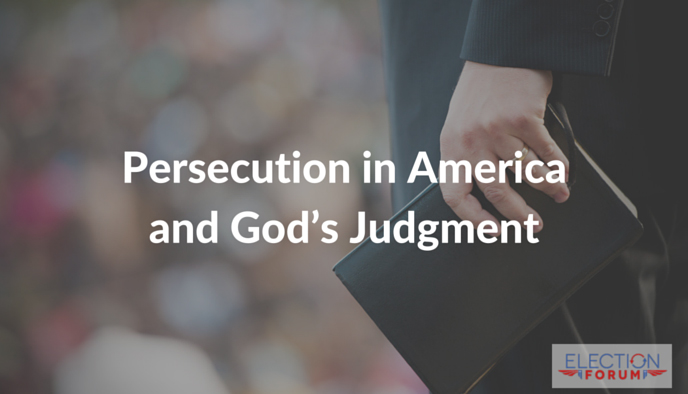 In light of the Obama/Clinton attacks on Israel, the Supreme Court on same-sex marriage, and the persecution of Christian business owners and evangelicals, consider this.

Franklin Graham warns that God may bring judgment on America.

Graham states: “Our nation has a spiritual problem and we need God’s forgiveness and we need to repent of our sins and turn from our sins because I do believe that God’s judgment will come on this nation.”

He reminds us that God judged Israel “time and time again” when they turned against him and worshipped false gods. He believes God could do the same to America.

He also warns that Christians will be persecuted as a result of the Supreme Court’s marriage ruling.

“You better be ready and you better be prepared because it’s coming. I think there will be persecution of Christians for our stand. . . . I believe the Bible. God loves us, no question about it. So when the president says #LoveWins, yes God loves us, but sin is sin, and God has standards. When we violate those standards, any type of sexual relationship outside of a marriage relationship between a man and a woman is a sin against God.

“If pastors are going to be forced to provide marriage services for gay couples, I certainly am not going to do it because I would be  partaking in a sin against God. I just can’t do that.”

And Graham shares concern for his nation because of this ruling:

“I’m disappointed because our government is recognizing sin. This court is endorsing sin. That’s what homosexual is. It’s a sin against God, just like any other sin. For the court to endorse sin, I am saddened for our country. . .We will have to go by what the court says but as far as for me, I will never recognize it in my heart because God gave marriage between a man and a woman. . .God gave us marriage and that’s just it, period. God does not change his mind.

“I think our country is the loser because marriage is an institution that God has given. And for us to now give this to same-sex couples, who is to say that in a few years from now a man cannot marry his daughter or two men can marry one woman? Where do you draw the line?”

Graham explains that he upholds one-man-one-woman marriage out of love for homosexuals.

“Do I wish ill to gay couples? No, I don’t. But I want them to know the truth — that they are living a sinful life and a sinful relationship and God is going to judge sin one day and the Bible says that sinners will be separated from him in a place the Bible calls ‘hell’. . .I love gay couples enough to warn them that God is going to judge one day and I want them to repent and believe on the name of the Lord Jesus Christ so that they will be saved.”

What do you think? Email me at craig@electionforum.com

3 Comments on “Persecution in America and God’s Judgment”