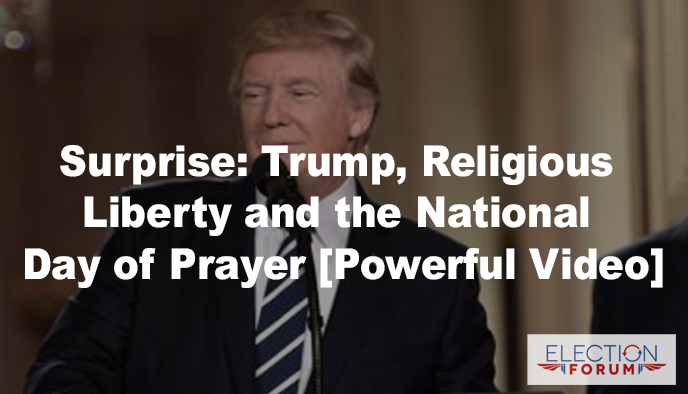 President Trump surprised the world today on the National Day of Prayer.

With an executive order, he reaffirmed our religious heritage of protecting people of faith.

The free exercise of faith is guaranteed by the First Amendment. But it’s been abused and attacked.

Christian business owners have been forced into bankruptcy. Christian employees forced out of work in the private sector and government. Ministries forced to promote abortion. And so much more.

Christians have been pleased with much of what Trump has done in the last 100 days.

Jerry Fallwell Jr. President of the largest Christian college in America was interviewed on TV about the first 100 days.  Here is what he said:

“I think reuniting Israel with America after eight years of treating them badly, appointing Neil Gorsuch to the Supreme Court, appointing people of faith to his Cabinet in almost every area… I think he is attacking ISIS so that Christians being murdered in the Middle East will stop. All those things, evangelicals love.”

He added that evangelicals are angry at moderate Republicans, “These moderates pretend to be conservatives, they woo voters, and then they’re not conservative when they get in office. So that part just makes my blood boil.”

You can see the full interview here. Click to watch.