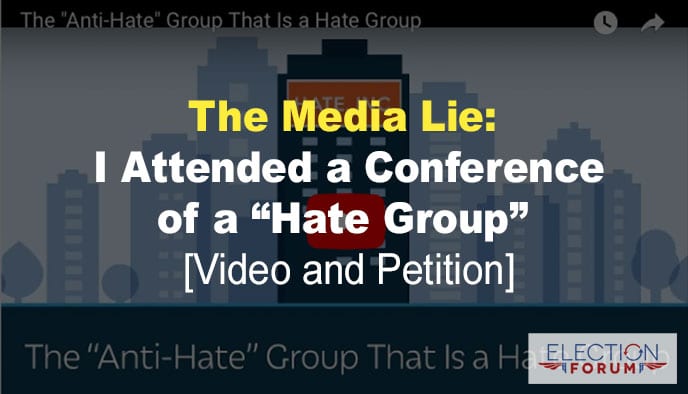 President Trump and I recently attended what the biased media called a “hate conference.”

Let me tell you what happened …

First, I’ve been trying to warn America about the dangers of the Southern Poverty Law Center for years.

It lies and is deceptive – it silences its opponents with its “hate group” label.

Its “Hate Map” identifies hate groups across America, but the SPLC puts Christian, conservative and anti-Islamic extremist groups in with hate groups.

This false and unfair categorization is well-known; professionals would never pay attention to its horrific distortion of truth.

But that didn’t stop publications like Newsweek, and news organizations like CNN, from broadcasting misleading stories based on the SPLC “hate group” label.

“Donald Trump to speak at hate group’s annual event, a first for a president,” screamed one Newsweek headline.

Both articles dealt with Trump’s address at the Family Research Council’s annual Values Voter Summit, a conference sponsored by many mainstream conservative groups.

The pro-family value FRC is on the SPLC’s “hate group” list. So, it figures that anyone who attended the event, even Trump, is a “hater.”

The Southern Poverty Law Center bills itself as a watchdog of hate groups. It started off as a noble protector of civil rights causes.

But today, it is nothing more than a sham – a progressive leftist tool that uses every excuse possible to bait unsuspecting donors.

Its goals are to shut down free speech with anyone it disagrees with, especially Christian and conservative groups.

And the mainstream media eats up their lies as if they were facts. A little journalist research on their part would prove the SPLC wrong.

Christians who believe in a Bible-based worldview are being slandered with lies and falsehoods:

They are labeled “hate groups,” alongside sinister white supremacists and Nazis.

How ironic … as Christians we are to be known for our love for one another.

Luke 6:35 says, “But love your enemies, and do good, and lend, expecting nothing in return…”

1 John 4:7 tells us, “Beloved, let us love one another, for love is from God; and everyone who loves is born of God and knows God.”

“Hatred stirs up conflict, but love covers all wrongs.”

As Christians, we are defined by our Father’s love, regardless of the SPLC’s “hate” for us.

Sign the petition to stop the lies and deception of the SPLC by clicking this link: https://exposesplc.com/