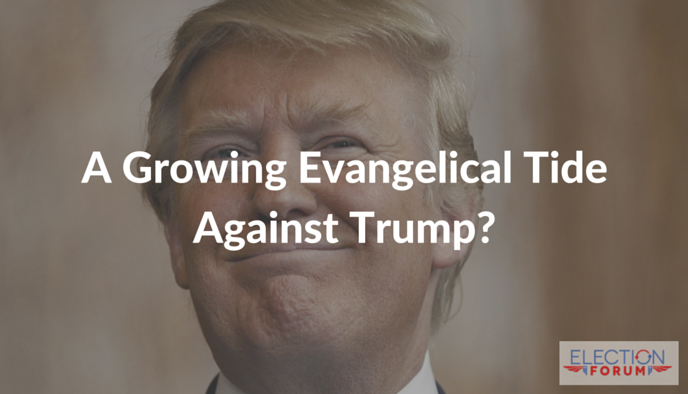 It’s expected that 20-35% of Evangelicals are for Donald Trump.

On our Election Forum poll, the numbers are now reading:

Other (including candidates who have dropped out): 28%

Bernie Sanders: >1%
Note: If you haven’t voted yet in our poll, vote here.

Evangelical voters are split. In some states, a plurality has sided with Trump, even while a growing number of leaders in the Body of Christ oppose him. Nominal Christians are big supporters of Donald Trump, according to one poll, but more devout believers (based on weekly attendance and other factors) hold him in doubt.

Pastor and Biblical commentator Max Lucado offered a general demand of “Decency for President”. Lucado cannot understand how any man would publically slam, trash, and mock people, then call himself a “Bible-believing Christian.” Some of Trump’s notable insult targets include Jeb Bush: ““A total embarrassment to both himself and his family”; Rick Perry: “He should be forced to take an IQ test.”; and also Carly Fiorina: “Look at that face. Would anyone vote for that? Can you imagine that, the face of our next president?!”

“We can only hope and pray for a return to decency. Perhaps Mr. Trump will better manager his antics,” Lucado claims.

Most evangelical leaders are for Cruz, but not all (see this link for a list of endorsements by faith leaders)

A president should demonstrate strong and consistent character on issues that matter, as well as in his (or her) relationships with individuals and nations. Their political positions should not only be sound, but trustworthy.

The next President should embrace a Biblical worldview. Currently, Trump has a weak, nominal understanding of Christianity. Trump boasts: “Nobody reads the Bible more than me”, yet he cannot name his favorite verse. He also claims he has never asked God for forgiveness.

He has signaled support for his pro-abortion sister/federal judge. He supports federal taxpayer funding for Planned Parenthood if it “stops” abortion. Yet two years ago, Donald Trump tweeted that abortion should be legal up to nine months into the pregnancy. He supports his very liberal, pro-abortion sister as a potential Supreme Court justice, too.

His strongman approach to leadership, especially the military, should raise major concerns. During a debate, he stated that the army should do whatever he asks, even if it means targeting innocent civilians in the Middle East, or family members of terrorists.

Donald Trump wants to incorporate the harsher British libel laws, which would make it much easier to prosecute the press for criticism of public figures. This is a scary thought, and a major violation of the First Amendment.

And what kind of example does he leave for our children? Moral leaders fear that he will hasten the United States’ moral decline if elected.

A momentum of “No Trump” Evangelicals is rising. Will it matter?

Here are some Christian criteria for choosing the next President:

Based on his prior record and current rhetoric, there remains plenty of doubt about Donald Trump in all of these categories.

3 Comments on “A Growing Evangelical Tide Against Trump?”