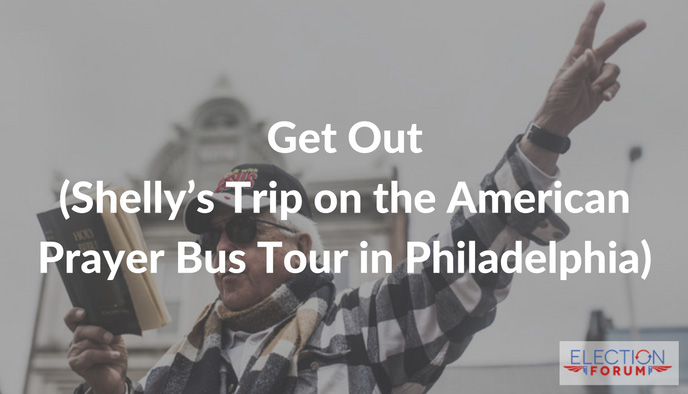 Here’s my wife Shelly Huey’s report on her tour with the American Prayer Bus at the Democratic National Convention in Philadelphia:

Last week I jumped onto the Pray for America Bus tour. Sponsored by the National Day of Prayer and The Congressional Prayer Caucus Foundation, the bus was scheduled to be at both the Republican and the Democrat conventions.

When I landed last Monday in Philly, it looked like it was going to rain. By the time I got to the hotel, it was a downpour. Thunder clapped and lightening struck right near the hotel. An unexpected summer storm hit. The people were surprised by it. It caught them off guard.

Three team members joined me, from across the nation.

Together we descended on an unsuspecting city. Everyone living in Philly was expecting an onslaught of regular folks, media, reporters, hyped fans, protesters, delegates, interns, activists, elected officials and campaign staff.

All of those types of people were there.

And they certainly weren’t expecting us.

They didn’t know we would be willing to talk with them.

And pray with them. And we did.

The bus announced our arrival.

It was wrapped in red, white and blue.

The words on the sides blasted “Pray for America”.

“In God We Trust” was emblazoned on the back.

You couldn’t ignore it. And no one did.

They all saw it.

Some reacted with joy, and grabbed their friends and pointed it out.

Everywhere we stopped, people came up to the bus to take pictures, not just of the bus, but with themselves next to it.

Some reacted with wonder. They stood at a distance and read the words on the bus. Praying for America was something that they hadn’t though of.

They weren’t sure if its In God that they Trust.

They hesitated to take a picture of the bus.

Some reacted with distain. They saw the bus, read the words, saw us and immediately averted their eyes. They wanted nothing to do with us. They didn’t want to speak with us or even be near us. Some even walked on the other side of the sidewalk or crossed the street to avoid us.

If the Pray for America bus just drove around Cleveland and Philly, it would have made an impression. That was evident.

But we didn’t stay in the bus.

We found people. We talked with them. We went to where they are.

We talked with Muslims, Jews, Hindus, Buddhists, Catholics, Protestants, Atheists and Christians. From all walks of life. All ethnicities. All ages.

Everywhere we went we were outside. In public. Out in the open.

Where everyone can see.

We always asked them “What can I pray for You for?”

Some had immediate answers. Their answer was on the tip of their tongues.

Some took a little longer to explain. They had to think about what they needed prayer for. Some didn’t know until we asked more questions.

We then asked, “Can I pray for You now?”

And so we prayed. And the Holy Spirit moved.

More than You can imagine or think.

An unexpected downpour of love washed over the unsuspecting people.

The people were surprised by it. It caught them off guard.

A summer storm of grace that they will never forget.

Because of the Name of Jesus and His cleansing blood.

You don’t need to get on a plane and then get on a bus, to pray for others.

Or to tell others about Jesus.

Our next journey will take our Bus Tours to New York from Halifax Any questions or comments? Email me at shellynotw@gmail.com.