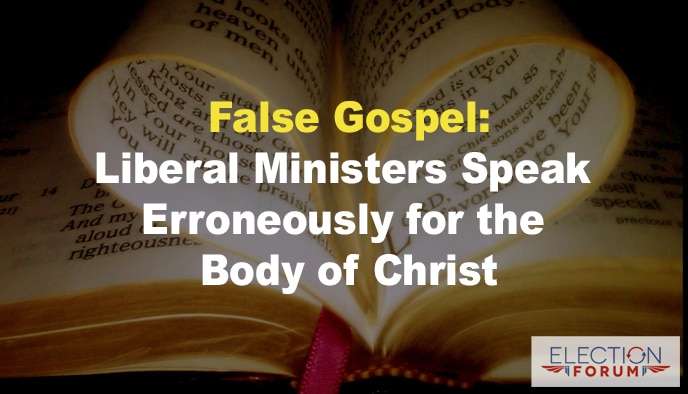 The demonstration drew many more participants than originally anticipated, as it was called “One Thousand Ministers March for Justice.”

Protesters openly called for the impeachment of the President. One protester carried a sign that said, “Repeal and Replace Trump Pence.”

The march was organized by Reverend Al Sharpton of the National Action Network. Of the event, Sharpton said, “We wanted to say this nation is in moral trouble.”

On that, we can all agree.

But on the details…Christians disagree.

The march articulated a gospel that is not the one preached by Jesus, which teaches us that the crux of our faith is our personal relationship to God, not a progressive social agenda.

The social gospel is an ideology that believes salvation is through social reform, not exclusively personal conversion.

Reverend Jim Wallis, founder of Sojourners magazine and social justice organization, called the demonstration “theological” because “the soul of the nation and the integrity of faith” were at stake over racial issues. But the protesters who marched focused primarily on progressive social issues and socialism.

Reverend Jamal-Harrison Bryant, an African Methodist Episcopal pastor from Baltimore, criticized evangelical ministers who support President Trump, as they “declare erroneously an outright lie- that Donald Trump is a man of God.”

Rev. Bryant claimed that the opinions of those who support Trump “do not reflect the body of Christ at large.”

Many of the protesters were not even Christians, as the march included Buddhists, Hindus, Muslims, and the occult.

The liberal media would like to give the impression that people of faith are united across a progressive, liberal approach to politics and social issues.

Let’s not allow one march to speak for us as Christians. We must speak out and stand for our beliefs, or the liberal media will speak for us.

Remember the words of Jesus, who said,

“You are the light of the world. A town built on a hill cannot be hidden. Neither do people light a lamp and put it under a bowl. Instead they put it on its stand, and it gives light to everyone in the house.” (Matthew 5:14-15)

My prayer is that the authentic body of Christ will speak out and stand up for the gospel.

One Comment on “False Gospel: Liberal Ministers Speak Erroneously for the Body of Christ”