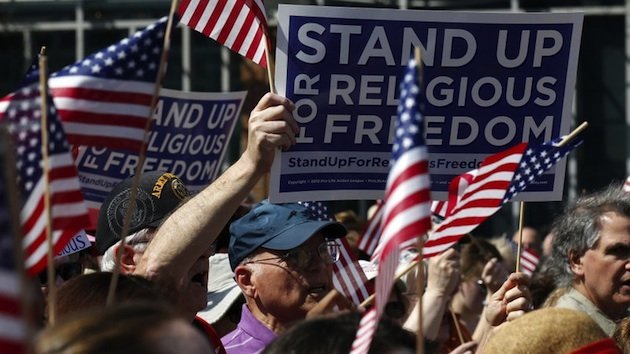 One of the most horrific and dangerous pieces of legislation ever devised to attack Christian liberty and the free exercise of religion is the so-called Equality Act.

Few people know about the Equality Act. Yet it will have a devastating impact on people of faith should it become federal law.

Here are 11 facts you need to know about this bill:

1. The Equality Act isn’t about equality.

This law will prohibit “discrimination” based on sex, sexual orientation and gender identity in areas such as:

The bill also will expand the definition of public accommodations to include all places or establishments that provide:

The Equality Act will also expand numerous federal civil rights laws – including the Civil Rights Act of 1964 – to include those with non-traditional sexual orientation – and those who identify as non-biological genders – as protected classes.

2. The Equality Act will be used to define Christians as “haters” subject to criminal prosecution in federal court.

Any recognition of the differences between the sexes – or any preference for traditional sexual morality – will be viewed as actionable “hate.”

The result will be a proliferation of lawsuits claiming discrimination of all kinds.

The Equality Act will prohibit an individual from being denied access to shared facilities including restrooms, locker rooms and dressing rooms that are in accordance with the individual’s gender identity.

The new standard of discrimination will be based on the concept that “gender identity” is in one’s head … and that it has nothing to do with biology.

The Equality Act says each individual must be treated according to the sex he or she thinks or feels he or she is at any moment … or else face the full force of this retaliatory law.

The law will allow the Department of Justice to intervene in Fourteenth Amendment “equal protection” actions in federal court regarding alleged sexual orientation and gender identity discrimination.

When lies are made into laws, people get hurt.

Here are some of the lies that are codified into the Equality Act:

The Religious Freedom Restoration Act was created in 1993 in response to a Supreme Court ruling that makes it a requirement for government to prove a “compelling interest” before enacting any law or regulation that violates someone’s sincerely-held religious beliefs or freedom of religious expression.[1]

Nevertheless, the Equality Act will end freedom of religious expression in America.

The government will become the new “morality police,” dictating to churches and other faith-based institutions who they can hire and how their facilities must be used.

And they will be prosecuted if they don’t fall lock-step into a view of human sexuality that directly contradicts orthodox biblical teaching.

5. The Equality Act changes America for the worse.

As outlined above, this bill will criminalize the practice and beliefs of Christianity … and those who try to live according to those beliefs and practices.

It will also criminalize parents who believe in and teach their children traditional values regarding sex and gender.

In addition, the Equality Act will:

The bill will also require doctors to affirm a child’s gender confusion. This means doctors could be forced to perform double mastectomies on healthy 13-year-old girls who feel like they are boys…

And pediatric endocrinologists will have to provide hormone blockers like Lupron to kids experiencing gender dysphoria … or be charged with discrimination.

Ten years ago, there were only two hospitals in the U.S. that performed sex-change surgery. Today there are 50 … and the backers of this bill want to see sex-change operations performed in every public and private hospital in America.

6. The Equality Act will officially end parental rights regarding rearing their own children.

The usurpation of parental authority has already begun.

Recently, when parents in Ohio declined to provide the risky hormone therapy their daughter requested to begin the process of transforming her into a boy, the child’s doctors contacted the state’s Child Protective Services.

Ultimately, the parents’ rights were terminated.

Under the Equality Act, what happened to this couple in Ohio will happen nationwide.

7. The Equality Act will outlaw disagreement on important matters such as marriage and sexual identity.

Disagreement on important moral and biological issues is not discrimination.

But the Equality Act turns ideological, philosophical and moral disagreement with what the legislation defines as “equality” into “hate” punishable by both state and federal governments.

“Our laws should respect the constitutionally-guaranteed freedoms of every citizen, but the so-called ‘Equality Act’ fails to meet this basic standard. It would undermine women’s equality and force women and girls to share private, intimate spaces with men who identify as female… Like similar state and local laws, it would force Americans to participate in events and speak messages that violate their core beliefs… This bill – and similar proposals such as ‘Fairness for All’ – undermines human dignity by threatening the fundamental freedoms of speech, religion, and conscience that the First Amendment guarantees for every citizen. Americans simply deserve better than the profound inequality proposed by this intolerant, deceptively-titled legislation.”[2]

Think about the ramifications of erasing all gender distinctions. If you erase gender:

This is why many gay and lesbian activist groups are opposed to the bill. They see the ramifications of the legislation more fully and accurately than do most.

Martina Navratilova –the self-identified lesbian tennis pro who won nine Wimbledon championships between 1978 and 1990, and who is considered by many to be the greatest female tennis player of all time – is opposed to the Equality Act.[3]

9. The Equality Act will be used to legitimize pedophilia by creating two new protected sexual orientations.

The plus sign in LGBTQ+ is a multi-purpose symbol that means pansexual, polyamorous and asexual … but it also means “minor-attracted” people and “youth-attracted” people – soft terms that are used to skirt around pedophilia.

This should shock and alarm you.

Some states have already lowered the “age of consent” for sexual assault crimes to 16. The backers of the Equality Act want to lower the age of consent nationally to 14 … or even lower.

10. Hollywood, the media and Silicon Valley companies are strongly pushing the Equality Act.

The bill has 161 corporate sponsors. Among them are:

The pressure to pass this legislation is immense.

11. The Equality Act is the most dangerous assault on freedom of speech and freedom of religion ever proposed on a national level.

This law will effectively overturn and nullify the First Amendment.

The Equality Act is an all-out assault on parental rights, on the family, on the church, and on millions of Christians and people of faith all across America. It dictates that faith must be confined to the mind alone … and not applied to actions or behaviors.

Note that there is no religious exemption in this bill.

Almost no institution or person of faith – Christian, Muslim, or otherwise – will escape the reach of this draconian law.

The Equality Act has already passed in the House and is now about to be voted on in the Senate.

During debate on the bill in the House a Congressman from Florida objected to the gender confusion aspects of the bill. He said, “When men or women claim to be able to choose their own sexual identity, they are making a statement that God did not know what he was doing when he created them. The gender confusion that exists in our culture today is a clear rejection of God’s good design.”

Jerry Nadler (D-NY), chairman of the House Judiciary Committee, responded, “What any religious tradition describes as God’s will is no concern of this Congress.”[4]

The Equality Act must be stopped. It must not be allowed to pass the Senate.

PLEASE contact the two U.S. Senators representing your state and urge them to vote against this terrible bill. Give them your reasons why this legislation would destroy the First Amendment – and America as we’ve known it for 230 years.

There are a number of different ways to contact U.S. Senators. Here’s a web site that lists all 100 U.S. Senators alphabetically. Find your senators and click on their names. You will be sent to their individual web sites where you can find their email addresses, phone numbers and other information. Click HERE to get started.

Please sign our petition and send it to your friends and family. Click HERE to view. You can e-mail this petition to others or post it on social media. We need to overwhelm the Senators with opposition and to vote “NO” to the Equality Act.

NOTE: To discover more about the Equality Act and the assault on religious freedom in America, read my book The Christian Voter: 7 Non-Negotiables for Voting For, Not Against, Your Values. You can order the book on Amazon here. Or you can order online here, or by phone at 866-382-2226. You can also send a check for $18.84 (includes shipping) payable to Media Specialists and send it to this address:

6 Comments on “Criminalizing Christianity: 11 Disturbing Facts You Need to Know About the So-Called ‘Equality Act’ [Petition]”