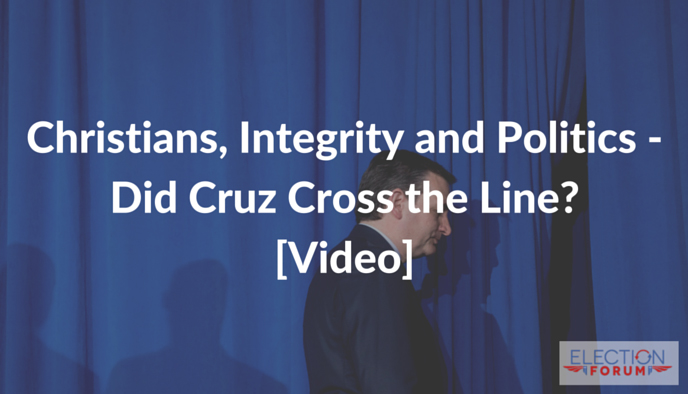 He outlined a path to turning America around.

But he did not endorse Donald Trump for President.

Instead, he told the crowds: “Vote your conscience.” He says he won’t attack Donald Trump. But at this point, he won’t officially endorse him.

I understand evangelical Christians, conservatives, and libertarians have great reservations about Donald Trump, and many are still undecided.

But they’re not sure about Trump, either.

But Ted Cruz made a pledge to support whoever the Republican nominee would be. At this point, he is breaking that pledge. He is breaking his word.

This issue of integrity is critical.

But his personal animosity over Donald Trump’s unethical assault on his wife, and immoral lie about his dad has had him say, it suspends his pledge.

Here is his statement:

One Cruz delegate was furious at Cruz’ refusal to endorse Trump, that she declared to the media: “Cruz lied to me!”

Check out this video to get more info:

I am curious what you think.

If someone does something wrong to you, does that give you the right to go back on your promise?

Recall the account in the Old Testament between Joshua and the heathen Gibeonites (Joshua 9 and 10).

They were afraid that the nation of Israel would kill them, because God had promised the entire Promised Land to the Israelites. So, they made it look like they had traveled a long distance with moldy food, dusty and dirty, even though they lived closed by.

They sought an alliance with the people of Israel, and even pledged to make themselves servants.

Joshua agreed—without first praying about it—but then found out that he was deceived.

“And it came to pass at the end of three days after they had made a league with them, that they heard that they were their neighbours, and that they dwelt among them. 17And the children of Israel journeyed, and came unto their cities on the third day. Now their cities were Gibeon, and Chephirah, and Beeroth, and Kirjathjearim. 18And the children of Israel smote them not, because the princes of the congregation had sworn unto them by the LORD God of Israel. And all the congregation murmured against the princes. 19But all the princes said unto all the congregation, We have sworn unto them by the LORD God of Israel: now therefore we may not touch them. 20This we will do to them; we will even let them live, lest wrath be upon us, because of the oath which we sware unto them. 21And the princes said unto them, Let them live; but let them be hewers of wood and drawers of water unto all the congregation; as the princes had promised them.” (Joshua 9: 16-21)

Without praying for God’s guidance first, Joshua entered the agreement with the Gibeonites.

In making a league with them, he did contrary to what God wanted him to do.

I like about Ted Cruz, but this is quite troublesome.

A similar thing like this happened to me when I ran for Congress.

I made a pledge to support the Republican candidate who would win.

Several of my contenders were very troublesome, who were running against me, but I made the pledge.

They made the pledge, too.

It was mayor the of Redondo Beach, and he would not endorse me, despite his promise to do so.

So I know the situation every well., and I know what the word of God says. What do you think?