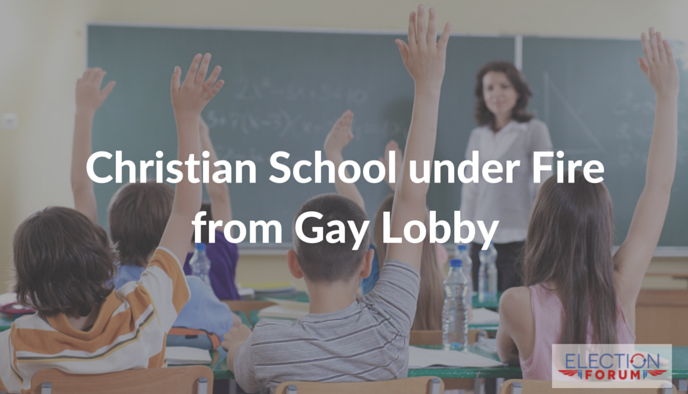 A lesbian couple is suing a Christian school for refusing to teach their child.

The school policy requires that students and their families adhere to Biblical principles:

Mt. Erie Christian Academy is a religious, Bible-believing institution providing education in a distinct Christian environment, and it believes that its biblical role is to work in conjunction with the home to mold students to be Christ-like. On those occasions in which the atmosphere or conduct within a particular home is counter to or in opposition to the biblical lifestyle that the school teaches, the school reserves the right, within its sole discretion, to refuse admission of an applicant or to discontinue enrollment of a student. This includes, but is not necessarily limited to, living in, condoning or supporting sexual immorality; practicing homosexual lifestyle or alternative gender identity; promoting such practices; or otherwise having the inability to support the moral principles of the school (Leviticus 20:13a; Romans 1:21-27; Matthew 19:4-6; 1 Corinthians 6:9-20).

The lesbian couple had already enrolled their child, but when the school found out the student had “two mommies,” they met with the women and informed them that the school would no longer allow the little girl to attend.

A local attorney attacked the school, saying that “this is as devastating to the little 5-year old girl as some of those other vicious practices,” by which he meant human sacrifice or limb amputation.

The school is facing excoriating backlash from the gay lobby, as can be expected. They have reached out on social media, asking for support:

Hello Mt. Erie family! We have been informed that today Channel 10 news will be airing a story about a Biblical decision that the School board made regarding our admissions policy. We stand firmly behind our board’s decision and ask that you support us through this time. We may receive some backlash from those who do not respect our Biblical perspective, however we will continue to provide a Christian education. It’s more concerning that we have invited Channel 10 news to cover so many of the events and programs that we have for the community however they have never shown any interest, but the first opportunity they get to talk about controversy they are willing to spend significant resources to convince you that the church must conform to the world’s beliefs and disregard our own. Show your loving support for Mt. Erie Christian Academy by posting a positive review about our school on Google or Channel 10 news.

The First Amendment protects the right of a group of people to gather around shared religious beliefs and practices for mutual edification, instruction, fellowship, or any reason. If Americans can’t do this because they might offend a homosexual, or anyone else for that matter, then the First Amendment no longer has any meaning.

4 Comments on “Christian School under Fire from Gay Lobby”