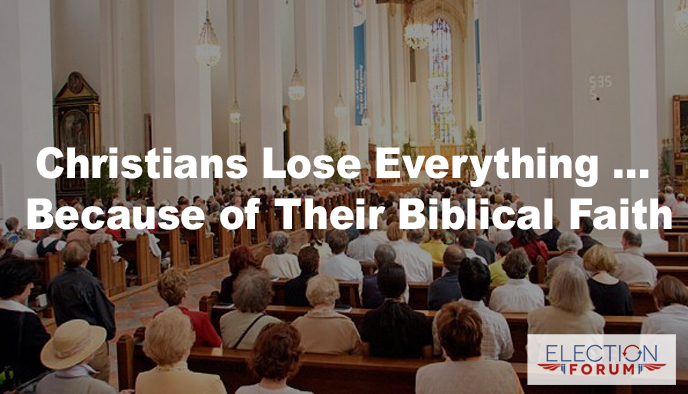 If you’re a Christian business owner, holding true to your faith can prove a costly proposition.

This escalating battle between homosexual rights and religious liberty will come to the Supreme Court in October when the High Court will rule on a Colorado baker who refused to make a cake for a homosexual couple.

He explained how it violated his faith and suggested they use the baker down the street.

The men lodged a complaint with the state civil rights commission, which ruled that Phillips violated anti-discrimination laws.

Phillips appealed to the Supreme Court, arguing he deserved a religious exemption based on the First Amendment’s guarantee of free exercise of religion.

Watch this video interview with Phillips from the TV show “The View” (which normally offers a very liberal progressive viewpoint). It is very hostile but gives good insight on religious freedom and those who oppose it.

In another case, the husband-and-wife owners of a bakery in Oregon appealed after being ordered to pay $135,000 in damages for declining to make a cake for a same-sex wedding.

The couple has had to close their bakery after facing legal costs and fines.

The Kleins argued in court that designing and baking a cake to celebrate a same-sex marriage would violate their Christian faith.

After the ruling, Melissa Klein said, “We lost everything. I loved my shop, and losing it has been so hard for me and my family.”

Arguing before an appeals court, their representative said, “The government should never force someone to violate their conscience of their beliefs.

“In a diverse and pluralistic society, people of good will should be able to peacefully coexist with different beliefs.”

Besides the fine, the Kleins were ordered to “cease and desist” from speaking publicly about not wanting to bake cakes for same-sex weddings based on their Christian beliefs.

In other words, they also lost their freedom of speech.

Meanwhile the Kleins await the outcome of their appeals.

“Blessed are you when people insult you, persecute you and falsely say all kinds of evil against you because of me.”

Through this persistent nightmare, the Kleins are standing firm in their witness for Christ.

The case is all about religious freedom and the protection of people of conscience.

We wouldn’t want a Muslim painter to be forced to paint a mural about [the prophet] Muhammad; we wouldn’t want an Orthodox Jewish writer to have to write a piece in the paper that contradicts the teachings of the Torah; or force a Hindu to serve meat.

And the government should not force a business owner to deny or violate their own faith.

Let’s pray the court decides on the side of the constitutional protections for Christians.