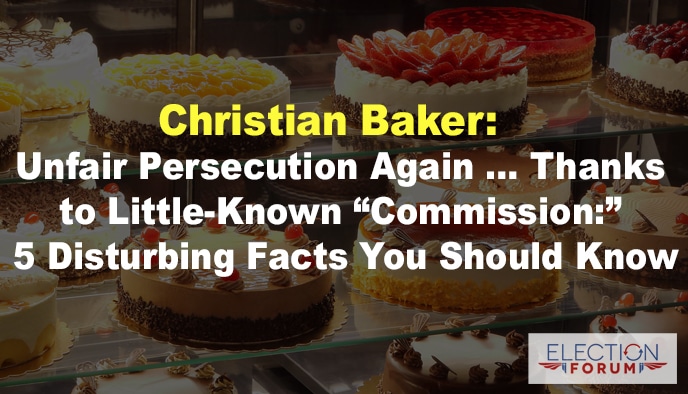 A new form of reverse discrimination by government agencies against Christians is increasing across America … thanks to the weaponization of state civil rights commissions by the LGBTQ community and other anti-Christian groups.

Six years ago, a gay couple filed a discrimination complaint with the Colorado Civil Rights Commission against Jack Phillips because he refused to create a specialty same-sex wedding cake to their specifications … even though he had offered – as an alternative – to sell them their choice of any standard cake from his display case.

The case dragged on for years in the Colorado courts … each time ruling against Phillips until his case was heard by the U.S. Supreme Court.

You remember the final outcome of that case … decided last June…

Now, in this latest attack, cakeshop owner Jack Phillips has a target on his back … put there in part by the LGBTQ community in Colorado … and in part by the Supreme Court’s narrow ruling.

This time, a transgender woman has filed a discrimination complaint against Phillips because he refused to design a cake celebrating her gender transition from male to female.

They are going after him specifically because he’s an outspoken Christian who views his artistry in designing specialty cakes as an expression of his faith.

Here are 5 disturbing facts you should know about this trend:

Phillips doesn’t refuse business to anyone. He never has. He joyfully and lovingly sells products to all customers who come into his shop – without discrimination and without animus. He treats all customers with equal respect.

But as an artist, he will politely and respectfully decline to use his artistic talents to celebrate and endorse a lifestyle that contradicts and mocks his deeply held religious beliefs.

Toleration and peaceful coexistence with those who hold beliefs and practice lifestyles you as a Christian find offensive are no longer sufficient.

Under the redefined definition of discrimination, if you don’t celebrate, endorse, embrace, and support the beliefs and practices of any “minority” or “protected” group, you are by definition guilty of discriminating against them.

They are legislatively-created administrative entities whose members are appointed, not elected.

These state commissions can levy fines and punish businesses by ordering “diversity training” and requiring other behaviors … but they have no accountability to the people they are hurting.

The Court made its decision on the basis of the Colorado Civil Rights Commission’s hostility to Phillips’ religious beliefs … not on the issue of the free exercise of religion versus anti-discrimination law.

They failed to address his claim that he has a First Amendment right to act according to his conscience in his business practices.

This is even difficult for some Christians to understand…

An artist produces art for the purpose of conveying a message … whether it’s a painting … a photograph … a sculpture … or a cake.

“Beloved, do not believe every spirit, but test the spirits to see whether they are from God, because many false prophets have gone out into the world.”
(1 John 4:1)

If the transgender woman had asked for a cake that expressed a message that didn’t contradict and mock Jack Phillips’ Christian faith, he would have designed and made the cake.

Conversely, if a heterosexual Christian asked Phillips for a cake expressing support for same-sex marriage, he would refuse.

It’s about the message, not the person.

Commissioners are appointed by state governors or by state legislatures.

Aggressive Democrat legislatures and governors are weaponizing state civil rights laws and commissions against Christians … and are unwilling to protect free speech and the free exercise of religion.

By electing conservative governors and state legislators in every state, civil rights commissions will become more balanced politically and philosophically in their membership … or better yet, will be defunded and shut down altogether.