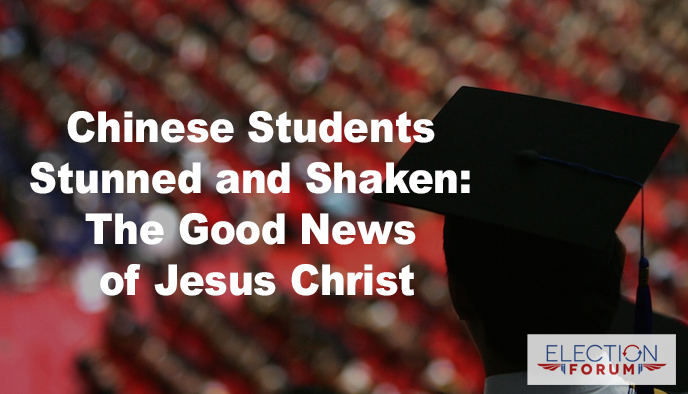 Every school year, nearly 400,000 Chinese students come to the United States to study at our universities.

What is not seen is that thousands of these students are exposed to the Good News of Jesus Christ.

For example, Intervarsity Christian Fellowship ministers to 2,000 Chinese students out of 5,000 international students it serves.

These students have grown up in an official atheist society.

In fact, they are raised in a society that says Christianity is a danger and enemy of the people.

To anyone living in a Communist country, the freedom of Christianity is often a foreign concept.

For example, my wife, Shelly, met a media worker sent from China to cover the Democratic National Convention.

“As part of a National Day of Prayer bus tour to the Republican Convention (in Cleveland), I felt we also needed to be at the DNC (in Pennsylvania) as well,” Shelly said.

“We were told about a Democratic State Faith Caucus meeting, so we went. We had no credentials. The doors were guarded. But I prayed that the Lord would get me through the door. A group of six of us were able to get into the closed-door meeting.”

The meeting was breaking up, and as the group moved through the room looking for people to pray with, they came upon the woman from China.

“She was intrigued by our National Day of Prayer. We explained to her that Jesus came to wash everyone clean of their sins.

“ ‘But I’m too dirty,’ she told us. We explained to her that’s exactly why Jesus came. It’s like a light bulb when on in her head. One of our people led her to the Lord, and she was rejoicing.

“She was so excited knowing Jesus for the first time in her life, and that He has washed her of all her sins. She didn’t know, because in a Communist country you can’t talk freely about these things.

“God opened up her eyes to this freedom. And I came away from this knowing that nothing is impossible with God.” (See Matthew 19:26)

“God opens doors that are slammed shut. He loved this woman so much, he brought her out of a communist country into a room where His servants would be.”

When communism took over China in 1949, Christian ministries were expelled, churches were closed and Christians were imprisoned and killed.

During the years, persecution has been great, especially during the cultural revolution in the 1960s and ‘70s under Mao Tse-tung.

Even today, persecution of hundreds of thousands of unofficial house churches continues.

In school, students are taught atheism and that Christianity is poison.

When they come to the U.S., they’re indoctrinated with socialism, Communist-China style, no other views.

They struggle with what their culture and history has told them verses the dramatic changes they see when they’re in the U.S.

Potential for evangelism is huge, as is the students returning to China to spread the Good News of Jesus Christ.

My wife also went to China carrying many Bibles. Ironically, the suitcase she brought back to the hotel turned out to be the wrong one.

Her Bibles were still at the airport. She accidentally had taken a college student’s suitcase and found in it church bulletins and a Disneyland ticket.

Incidentally, she was able to get her suitcase full of Bibles without detection.

And she was able to return the student’s suitcase … with a new Bible inside.

With the influx of new Christian students, pressure to open Christianity will be growing.

Already it is estimated that China has over 58 million Protestants, and that number is projected to grow to 160 million by 2025.

That would mean China would have more Christians than the U.S.

Like many world leaders and philosophies, Mao Tse-tung thought he could destroy Christianity and create an atheistic society.

But God has other plans. Not surprisingly, Christianity is spreading dramatically, despite growing persecution of Christians in the country.

4 Comments on “Chinese Students Stunned and Shaken: The Good News of Jesus Christ”